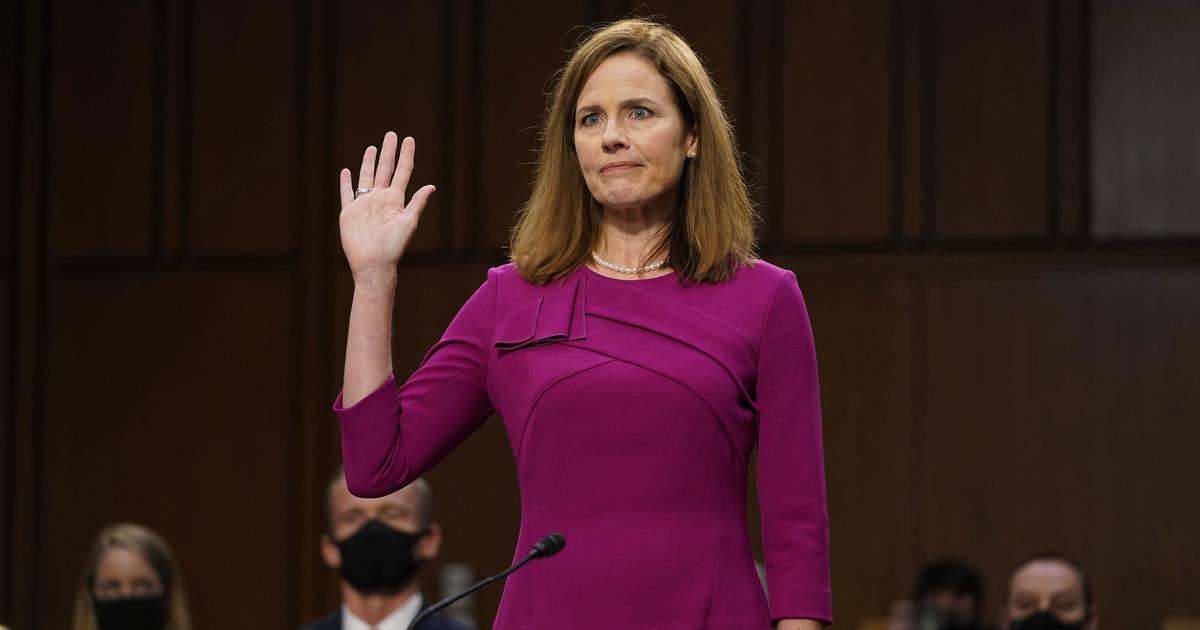 Washington — Judge Amy Coney Barrett vowed to fulfill her duties "faithfully and impartially" if she is confirmed to the Supreme Court, appearing before the Senate Judiciary Committee on Monday for the first of four days of confirmation hearings as Republicans move to install her on the high court before November's election."Courts have a vital responsibility to enforce the rule of law, which is critical to a free society. She instead spoke following Barrett's opening statement.Young called Barrett an "American original" and said that wherever she has done, "she's always been doing something important.""It's my hope that this body will confirm Judge Barrett in a bipartisan fashion," he said.Braun, meanwhile, said that when confirmed, Barrett will become the only Supreme Court justice to have spent the majority of her life in middle America, and the only sitting justice not to receive her law degree from Harvard or Yale.Braun described Barrett as a "legal titan who drives a minivan" and will make "all Americans proud."O'Hara, a former dean of Notre Dame Law School, recounted watching Barrett's career develop over the 15 years in South Bend and said students hold her in "awe of her intellect.""In many ways, Judge Barrett sprang full-grown into the legal academy," she said.Senator John Kennedy, a Republican from Louisiana, painted a colorful picture for how Barrett's confirmation hearing could take a turn for the worse, recalling the chaos that engulfed Kavanaugh's confirmation hearings in 2018."Now look, judge, I'm not naive," he said. It was a freak show."Kennedy described Kavanaugh's confirmation hearings as the "cantina bar scene out of Star Wars."The Louisiana Republican also said it must be difficult for a person of deep faith, as Barrett is, to be "called a religious bigot."After a brief technical hiccup, Democratic vice presidential nominee Kamala Harris appeared virtually, and slammed chairman Lindsey Graham for choosing to hold the hearings this week when the rest of the Senate had postponed business because of the recent positive diagnoses of senators."This committee has ignored commonsense requests to keep people safe — including not requiring testing for all members — despite a coronavirus outbreak among senators of this very committee," Harris said. "Mr. Chairman, this hearing is a clear attempt to jam through a Supreme Court nominee who will take health care away from millions of people during a deadly pandemic that has already killed more than 214,000 Americans."Senator Mazie Hirono, a Democrat from Hawaii, continued to raise concerns about the future of the Affordable Care Act if Barrett is confirmed to the Supreme Court, and said that for her, health care is "personal."She recalled being diagnosed with stage 4 kidney cancer several years ago, saying, "I know that having health insurance and access to health care saved my life."Hirono said she still has cancer but no longer receives treatment. White House chief of staff Mark Meadows does not appear to be in attendance.Graham recessed the committee for a break at 11:37 p.m. They are expected to return at 12:20 p.m. Still to deliver their opening statements are Hirono, Booker and Harris on the Democratic side, and Ernst, Crapo, Kennedy and Blackburn on the GOP side.Before the break, Senator Josh Hawley, a Republican from Missouri, lambasted Democrats for questioning Barrett during her confirmation hearing as a nominee to the 7th Circuit about her Catholic faith and called out Harris by name for questioning other nominees about their membership in Catholic organizations like the Knights of Columbus."When you tell somebody that they're too Catholic to be on the bench, when you tell them they'll be a Catholic judge, not an American judge, that's bigotry," he said. Lee reported "some remaining but improving fatigue," with all other symptoms "resolved" as of Sunday, Monahan wrote.GOP Sen. Mike Lee, who tested positive for COVID-19 10 days ago, is attending the Amy Coney Barrett hearings in person and does not wear a mask during his opening statement https://t.co/uScvfX9o80 pic.twitter.com/G4XTaWLkNlPresident Trump on Monday urged Republicans to "pull back" on confirmation hearings for Barrett and focus instead on passing a coronavirus stimulus bill, directly contradicting his words from less than a week ago when he told Senate Majority Leader Mitch McConnell to "focus full time on approving my outstanding nominee to the United States Supreme Court, Amy Coney Barrett.""The Republicans are giving the Democrats a great deal of time, which is not mandated, to make their self serving statements relative to our great new future Supreme Court Justice. Kavanaugh's nomination was ultimately approved.Invoking the Kavanaugh hearings, Senator John Cornyn of Texas called treatment of the justice an "absolute disgrace" and hopefully a "low point" for the Senate.In her opening statement, Senator Dianne Feinstein, the top Democrat on the committee, questioned whether Barrett would vote to overturn the Affordable Care Act if confirmed to the Supreme Court. She threw Graham's words back at him, quoting his comments in 2018 when he said he would not fill a Supreme Court vacancy in an election year."Simply put, I believe we should not be moving forward on this nomination," Feinstein said.Democrats are expected to follow this dual track in questioning Barrett: probing her opinions on the Affordable Care Act, and arguing that the very confirmation process is illegitimate.Just after 9 a.m., Graham opened the first day of Barrett's confirmation hearing, noting that the committee room has been set up in consultation with the architect of the Capitol and the attending physician to allow for lawmakers to "safely do our business."The "COVID problem in America it's real, it's serious, it's dangerous," Graham said.In attendance is Senator Mike Lee, who tested positive for COVID-19 after attending the Rose Garden ceremony where Barrett was announced as Mr. Trump's nominee last month.In his opening statement, Graham honored the late Justice Ruth Bader Ginsburg, whose seat Barrett will fill if confirmed by the Senate, and noted her nomination was approved with overwhelming bipartisan support, 96-3.Turning to Barrett, Graham said she is in a "category of excellence.""This is an election year.