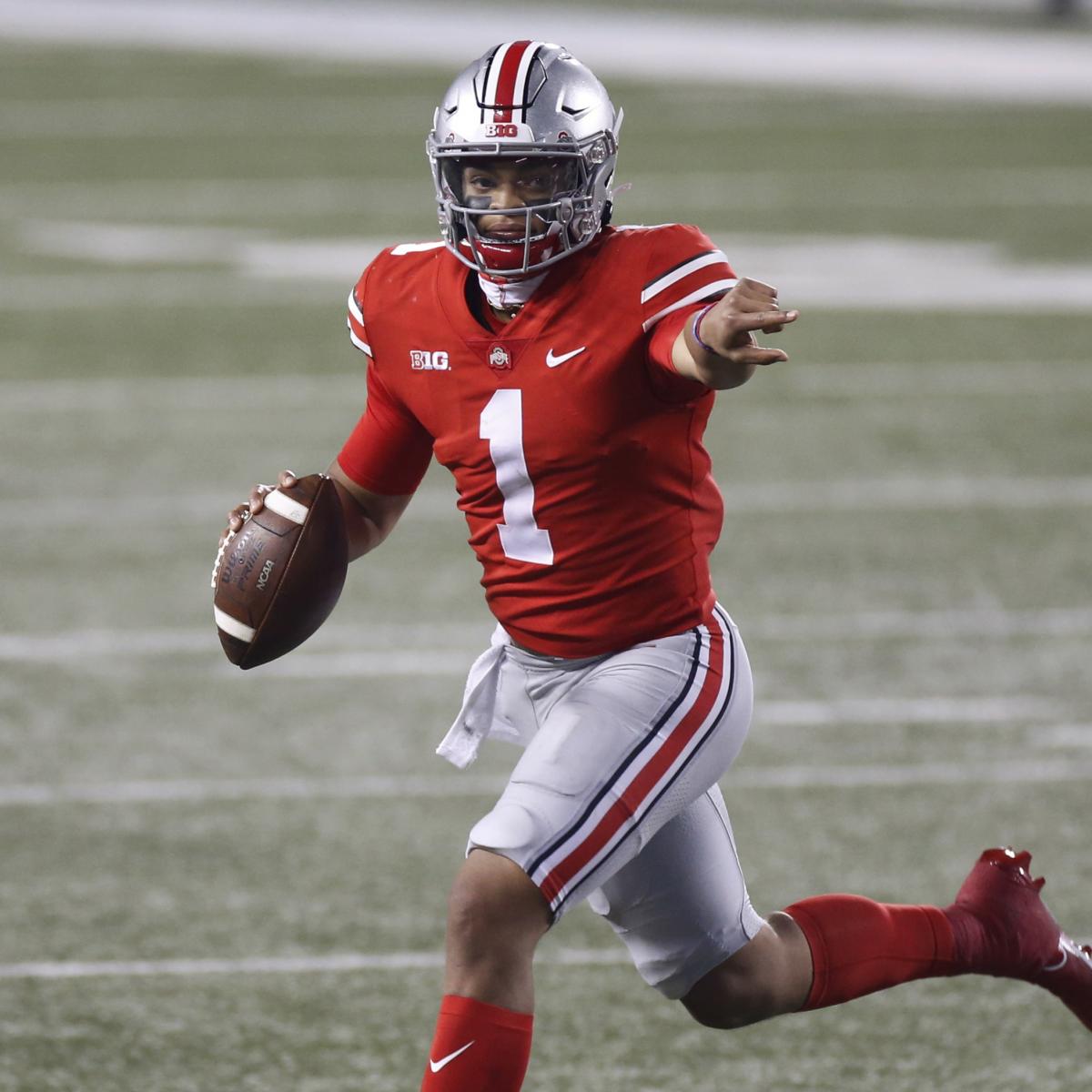 Yes, the AAC; not the ACC.What should we expect in each of those four marquee matchups?Will Kyle Trask further bolster his case for the Heisman against Vanderbilt?Do Liberty and Coastal Carolina keep hope alive for an undefeated showdown in December?And—a question we love to ask but seldom get right—which game will put the most points on the scoreboard?Bleacher Report's college football experts—David Kenyon, Adam Kramer, Kerry Miller, Joel Reuter and Brad Shepard—have predictions for each of those questions and more in advance of a huge weekend of collegiate pigskin.Brad ShepardI'm a believer in the Hoosiers, who are more than just a flash in the pan or a nice little half-season Big Ten story.Are they good enough to actually upset the Buckeyes? And then I had the Hoosiers losing close games to both Michigan and Michigan State, both of which they won in blowout fashion.At this point, it's almost a tradition that I pick against Indiana, so give me Ohio State to win by at least three touchdowns.So much of what Indiana has accomplished this season has been predicated upon turning turnovers into points.Through just four games, the Hoosiers have forced nine turnovers (eight of them interceptions) that set their offense up at the 50-yard line or better. But they also lost their last home game against Clemson by a 49-point margin, and they're even worse now than they were two years ago.So this question really boils down to No. 7 Cincinnati at UCF, and I cannot in good faith pick against the Bearcats after four consecutive wins by at least a 28-point margin.Last Friday's win over East Carolina was an expected blowout, but the way they dismantled SMU, Memphis and Houston—completely shutting down potent offenses while running all over their defenses—was incredible. But I suspect Desmond Ridder will extend his four-week streak of games with at least four touchdowns in a Cincinnati win.Joel ReuterThe Badgers have looked dominant in a 2-0 start that was interrupted by a COVID-19 outbreak, but those wins have come against an overmatched Illinois team and a floundering Michigan squad.That said, Wisconsin was expected to be quite good. Kerry MillerIf Oklahoma State wins this game, it will very likely reach the Big 12 championship game, considering its three remaining opponents (TCU, Texas Tech and Baylor) each has a sub-.500 record.Conversely, if Oklahoma wins this game and if Kansas State beats Iowa State, there would be a five-way tie in the loss column atop the Big 12 standings. The league may not have a playoff pulse at this point, but it could be a fun final few weeks.But I like Oklahoma State to win a close, high-scoring game.Oklahoma is just 1-2 this season against teams that presently have a .500 record or better, and the Sooners defense allowed at least 37 points in each of those contests. Willis has similarly dynamic dual-threat ability, and he'll take full advantage on Saturday.Liberty 31, NC State 28In the other pursuit of an undefeated season, Coastal Carolina faces off against a 6-1 Appalachian State team in a matchup of offenses that are both averaging over 40 carries and over 200 rushing yards per game.It makes sense to say that whoever controls the running game will come out on top, and the Chanticleers have limited opponents to under 100 yards on the ground in back-to-back games. That's enough for me to give them the edge in one of the biggest Group of Five games of the season.Coastal Carolina 32, Appalachian State 24       Kerry MillerCan we just take a step back and marvel at the thought of Coastal Carolina being favored against 6-1 Appalachian State?I know everyone has been saying South Carolina should be going after CCU's Jamey Chadwell to fill its head coaching vacancy, but he might be in line for some even better offers after the job he has done with the Chanticleers in just their fourth season at the FBS level.And I do think they're going to win this game. Kerry MillerReminiscent of Kyler Murray's journey to the stiff-armed trophy two years ago, the awesome thing about Kyle Trask's Heisman campaign is Florida's defense is so terrible that he usually has to stay in the game into the fourth quarter.Dude had five passing touchdowns in the first half against Arkansas last week, yet he was still out there pushing the Gators ahead by a 49-21 score with 13 minutes remaining.And while Vanderbilt has now lost 10 consecutive games against SEC foes, the Commodores have at least discovered some offense in recent weeks, averaging 435.3 total yards and 24.3 points in their last three games. The Flames lean heavily on Auburn transfer Malik Willis, who has racked up 1,645 yards and 15 touchdowns with a single interception as a passer while also running for a team-high 700 yards and nine touchdowns.NC State has faced four top-50 scoring offenses this season—Wake Forest, Virginia Tech, North Carolina and Miami—and surrendered no fewer than 42 points to each one.Conversely, the Wolfpack have rallied nicely after losing quarterback Devin Leary to a leg injury. And while the running game is ineffective, this is a favorable matchup for a couple of talented running backs (Zonovan Knight and Ricky Person Jr.).I believe Liberty wins a close one, but NC State scores 35-plus points along the way. Kerry MillerThe actual answer was very likely Kent State's 69-35 win over Akron on Tuesday night, but we're just focused on the Friday and Saturday games.The pick here would have been Ole Miss at Texas A&M.; After that game got postponed, I would've said Houston at SMU.