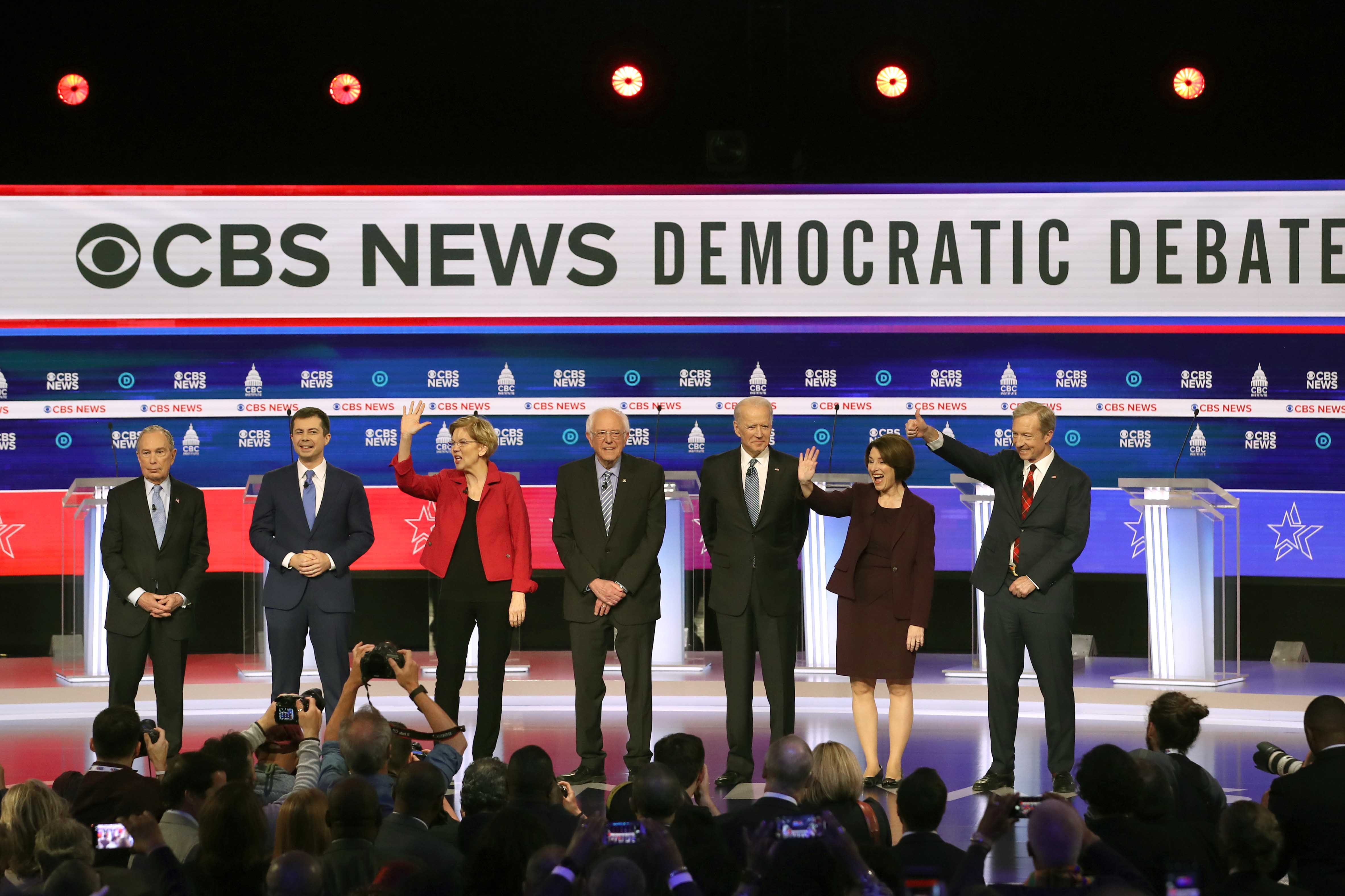 The billionaire media mogul essentially bought his way onstage and took heavy criticism from Elizabeth Warren, who repeated her performance from last week's debate in which she delighted in skewering him at every turn.Here are the debate highlightsSanders’ rivals wasted little time going after the frontrunner.In their opening comments, Bloomberg told Sanders that “Russia is helping you get elected”; Warren insisted that she would make a better president than Bernie”; Steyer said that while Sanders has the right analysis of what’s wrong with the economy, “I don’t like his solutions”; and Biden invoked the nearby African American church where nine worshipers were killed by a white supremacist before highlighting Sanders’ repeated votes against the so-called Brady Bill gun control legislation.“I’m hearing my name mentioned a little bit tonight,” Sanders said. And in answer to your question, that will come within the context of bringing nations together in the Middle East.”Asked about his history of sympathizing with socialist governments in Cuba and Nicaragua, Sanders said he has “opposed authoritarianism all over the world” and argued his comments on Cuba were similar to what former President Barack Obama has said.“Occasionally, it might be a good idea to be honest about American foreign policy, and that includes the fact that America has overthrown governments all over the world, in Chile, in Guatemala, in Iran, and when dictatorships, whether it is the Chinese or the Cubans, do something good, you acknowledge that,” Sanders said.Biden said Obama “did not in any way suggest that there was anything positive about the Cuban government.” He continued: “He in fact does not, did not, has never embraced an authoritarian regime and does not now.” Buttigieg chimed in shortly after, adding he isn’t looking forward to a general election that “comes down to Donald Trump with his nostalgia for the social order of the 1950s and Bernie Sanders with a nostalgia for the revolutionary politics of the 1960s.”“This is not about what coups were happening in the 1970s or ’80s,” he continued. You spoke overtime and I'm going to talk!” Cheers and applause rang out.Steyer denied the charges from Biden, saying, “I bought stock in a prison company thinking they did a better job, and I investigated, and I sold it.”Biden: “You knew when you bought it they'd done that.”Steyer said he has fought to end private prisons and started a bank to support black, Latino and female business owners. “You wrote the crime bill ...”Biden then cut him off.“Where we come from that's called Tommy come lately,” Biden said, upending the phrase Johnny come lately.Steyer, infuriated, pointed at Biden and accused him of making a “an absolute unfair statement.”Buttigieg called out Sanders for what he called the Vermont senator’s “incredible shrinking price tag” for his "Medicare for All" proposal.“I’ll tell you exactly what it adds up to: It adds up to four more years of Donald Trump, Kevin McCarthy as speaker of the House and the inability to get the Senate into Democratic hands,” Buttigieg said.Then he tore into Sanders’ electability, casting his nomination as all but a guarantee of losses at the presidential level and in key House and Senate races that could determine the control of each chamber.“The time has come for us to stop acting like the presidency is the only office that matters,” Buttigieg said, emphasizing the importance of maintaining control of the House and winning back the Senate.

As said here by https://www.facebook.com/NolanDMcCaskill