Chicago Dug the World?s Biggest Flood-Stopping Tunnel. What if the City Got It Wrong? 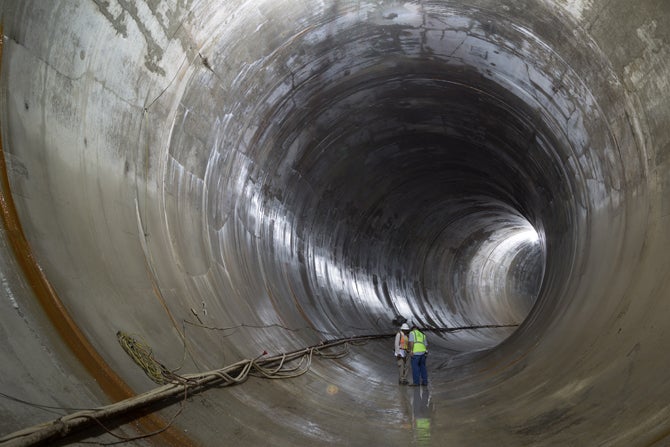 According to the Metropolitan Water Reclamation District of Greater Chicago, the agency that built and runs the project, the tunnels and reservoirs protect 1.5 million structures from flooding, in addition to keeping sewage out of Lake Michigan and the Chicago River. Though not quite finished (the tunnels are done, the reservoirs are not), the scheme has been and is being imitated in cities like Milwaukee, St. Louis, D.C., London, and Guangzhou, where the concept, 50 years after it was undertaken in Chicago, is seen as the state-of-the-art solution to flooding damage and water pollution. Chicago sewers were emptying into the river 100 days a year, overwhelmed by as little as a third of an inch of rain. Fitzpatrick drives me to McCook Reservoir, the mammoth holding pen, opened in late 2017, for the tunnels that run beneath the Chicago and Des Plaines rivers. It shouldn’t have a dead river without fish in it.” But, he adds, it’s now clear that this 50-year, multibillion-dollar project will not be sufficient to stop flooding in Chicago. Long before the city was founded in 1833, the Des Plaines River would in wet years flood the mud flats west of Lake Michigan, creating a momentary inland water passage clear across the American continent (provided you carried your canoe around Niagara Falls). In 1900, engineers reversed the flow of the Chicago River to protect the city’s drinking water, shifting its fetid contents from the Great Lakes to the Mississippi, enraging the city of St. Louis (which sued, and lost) and, years later, making Chicago the single-largest contributor to the “dead zone” in the Gulf of Mexico. In 1978, Illinois Republican Sen. Charles Percy, looking back at decades’ worth of damage, declared Chicago the site of “the worst urban flooding known to any major city in America”—structural damage in neighborhoods, plus sewage in the river and the lake to the tune of 200 million solid pounds each year. Burns became an anti-flooding activist by accident, drawn into town halls where city officials would say things like, “Basements were not designed to be living spaces.” (The Chicago Mayor’s Office did not respond to requests for comment.) Around the neighborhood, she keeps an eye out for rain gardens and disconnected downspouts—home improvements that, while they may not help your house, do a civic good by slowing the rate at which water enters the city’s sewer system. The case against the Tunnel and Reservoir Plan is that, well, Chicago still floods. “The large and costly deep tunnel-reservoir system in Chicago is not adequate” to handle 50-year storms, Changnon wrote of the impacts from a September 2008 storm that caused the evacuation of more than 10,000 homes in the region. The Chicago Tribune reported that in the four years after the tunnels were completed in 2006, the MWRD released nearly 19 billion gallons of stormwater into Lake Michigan compared to 12 billion gallons in the preceding 22 years. In many storms, says Aaron Koch, who served as chief resilience officer for the city and now works as the Chicago director of the Trust for Public Land, the Deep Tunnel is helpless to empty undersized sewers battling against supersize storms and sprawl. “The MWRD designed a system of sewers, tunnels, and reservoirs for a city that doesn’t exist anymore,” says Karen Hobbs, a former deputy environmental commissioner in Chicago who oversaw the creation of the city’s climate plan and now works as a policy analyst at the National Resources Defense Council.

As said here by Henry Grabar