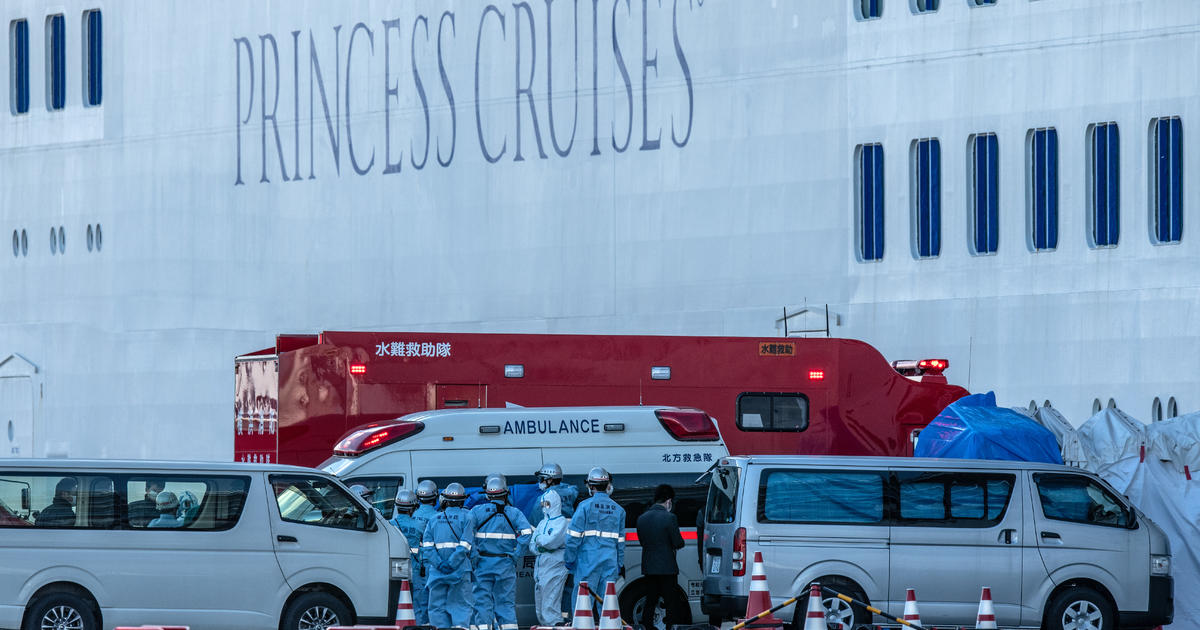 (1 of 4)An additional 41 people on board a cruise ship off Japan's coast have tested positive for the new strain of coronavirus, Japan's health minister said Thursday.The new cases raise the number of confirmed infections on board the ship to at least 61, said Katsunobu Kato.Japanese authorities have tested 273 people on board the Diamond Princess, which was quarantined after a former passenger, who disembarked in Hong Kong last month, tested positive for the virus."The results of the remaining 171 tests came out and 41 tested positive," Kato told reporters. Officials in China's Hubei province, the epicenter of the coronavirus outbreak, reported 69 new deaths and 2,447 new cases on Thursday. That brings the overall death toll from the virus to at least 634, and the total number of cases to at least 30,723.Four Americans who were taken to hospitals in San Diego after they were evacuated from the epicenter of the coronavirus outbreak in China were doing well, health officials said Thursday. The four patients were taken to two hospitals Wednesday after they arrived at Marine Corps Air Station Miramar on a U.S. government flight and were determined to have a fever or a cough.The patients were being tested for coronavirus, and the results may come back as early as Saturday, Dr. Francesca Torriani, program director of infection prevention at UC San Diego Health, told reporters Thursday. Dr. Li Wenliang, a 34-year-old ophthalmologist, warned fellow clinicians in a group chat in December about a SARS-like illness popping up in one of the main hospitals in Wuhan, BBC News reports.He was then told by government officials to stop "making false comments." After being diagnosed with the illness in January, he was lauded on Chinese social media as a hero for speaking out; local authorities later apologized.- Sophie Lewis and Alex SundbyA Chinese doctor who was threatened by his government after he publicly voiced concerns about coronavirus in December was in critical condition from the illness, China's Global Times reported. Ambassador Liu Xiaoming told journalists in London Thursday that British leaders' "words do not match with (their) deeds," pointing to the U.K. government's advice to citizens to leave China as soon as possible.Liu said there had been an "overreaction by individual countries." China has also balked at U.S. warnings against all travel to the country.The ambassador stressed that the head of the World Health Organization, Dr. Tedros Gebreyesus, on Wednesday said that adopting a "blanket approach" — banning travel to and from all of China or urging people to leave the vast country when 80% of the confirmed cases of the illness were still in just one province, could prove unhelpful."It's hoped that governments of all countries, including U.K., should understand and support China's efforts, respect the professional advice of the WHO, avoid overreaction and creating panic and ensure normal cooperation and exchanges between countries."Liu stressed that, "not the whole of China is an outbreak area. He did not say where the new patient did contract the virus, but the vast majority of cases have either been in the central China region at the heart of the outbreak, or in close contact with someone who was.Whitty said the new patient was being transferred to a "specialist" facility under the care of the U.K.'s National Health Service. Chest x-rays showed signs of infection and there was some abnormality in liver function, according to China's CCTV state television network.Thousands of people were stranded aboard two cruise ships in Asia on Thursday, quarantined by officials desperate to stem the spread of a deadly virus that has killed hundreds in China and spread panic worldwide.At least 20 people on board one ocean liner off the Japanese coast have tested positive for the new coronavirus, with thousands more facing two weeks of isolation. One American was among the first group of 10 diagnosed on Wednesday.In Hong Kong, meanwhile, 3,600 people spent the night confined aboard the cruise ship World Dream as authorities conducted health checks after three former passengers tested positive for the virus.- CBS/AFPTaiwan has banned international cruise ships from docking, Reuters reported, following news that 10 more patients tested positive for coronavirus on a quarantined ship docked in Japan.Many of the tourists aboard the quarantined ship spent time in Taiwan when the boat anchored at the island on January 31, according to an immigration authority cited by Reuters.Four of the 167 Americans evacuated from Wuhan, China, to Marine Corps Air Station Miramar in Southern California are being tested for the coronavirus, the CDC said Wednesday night. That brings the total number of deaths to at least 564, and the number of confirmed cases to at least 28,248.Officials from China's Hubei province, the epicenter of the outbreak, reported 70 new deaths from the novel coronavirus on Wednesday. They are being held at Travis Air Force Base.Health officials confirmed Wednesday the first case of coronavirus in Wisconsin and the 12th in the U.S. The adult patient, who has a history of traveling to China, has been isolated at home.