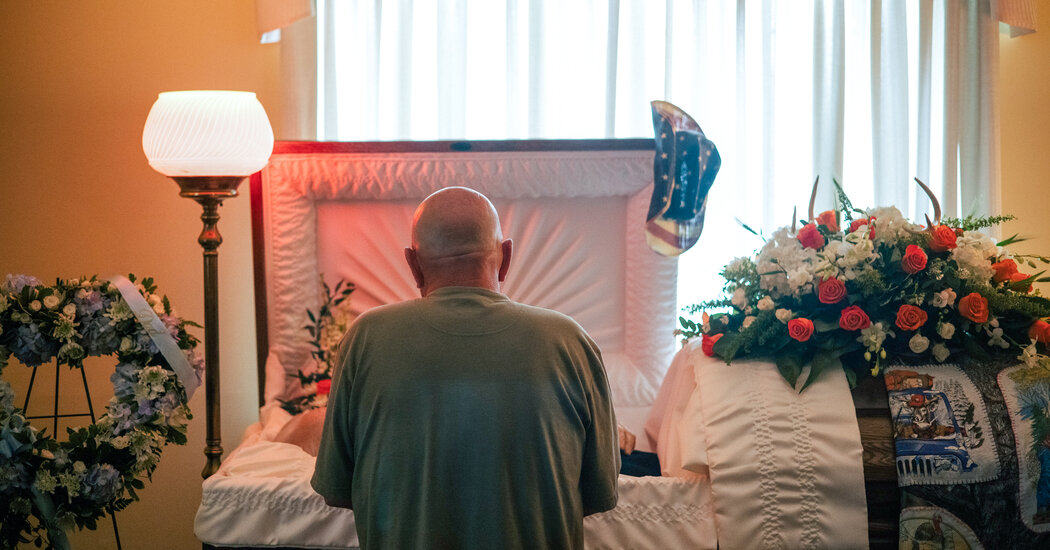 Had it not been for the removal of hundreds of deaths from tallies in California, the country would have surpassed the mark already.As the U.S. toll nears 600,000, questions remain about how to count the deaths.American tourists could soon be allowed freer travel to Europe.Calls grow in the U.S. for a commission to investigate the pandemic.Regeneron’s antibody drug is found to cut deaths in some hospitalized patients.The C.D.C. designates the Delta version of the virus a ‘variant of concern.’Japan pursues vaccine diplomacy in Asia, even as shots lag at home.After testing positive, the golfer Jon Rahm will return to play at the U.S. Open.The United States is poised to reach a once-unthinkable number of 600,000 Covid-19 deaths. Some places, including New Jersey and New York City, have classified those people as probable deaths and included them in their totals.— Mitch Smith and Lisa Waananen JonesAt leastone doseFullyvaccinatedTotal pop.18 and upThe European Union is expected to recommend lifting the ban on nonessential travel for visitors from the United States on Friday, opening for American tourists just in time for the summer season, which is crucial to the economy of many members of the bloc.On Wednesday, ambassadors of the E.U. countries indicated their support for adding the United States to the list of countries considered safe from an epidemiological point of view, a bloc official confirmed. Albania, Lebanon, North Macedonia, Serbia and Taiwan would also be added to the list, and the requirement for reciprocity dropped for the Chinese territories of Hong Kong and Macau.The European Commission recommended last month that all travelers from third countries who were fully vaccinated with shots approved by the European Medicines Agency or by the World Health Organization should be allowed to enter without restrictions, a policy switch that was first reported by The New York Times.The loosening of travel measures was enabled by the fast pace of vaccination in the United States and by the acceleration of the inoculation campaign in Europe, and bolstered by advanced talks between the authorities on how to make vaccine certificates acceptable as proof of immunity from visitors.But health policy in the European Union is ultimately the province of the national member governments, so each country has the right to tailor the travel measures further, including possibly adding more stringent requirements, regardless of the decision on Friday. (Lab experiments indicate that those variants can evade Lilly’s drug.) A third, from GlaxoSmithKline and Vir, has not been ordered by the federal government since being authorized last month.— Rebecca RobbinsFederal health officials have classified the Delta variant of the coronavirus now circulating in the United States as a “variant of concern,” sounding the alarm because it spreads rapidly and may partially sidestep certain antibody treatments.Officials with the Centers for Disease Control and Prevention on Tuesday emphasized that the authorized vaccines are highly effective against the variant, however, and urged all Americans who have not yet been inoculated to get fully vaccinated as soon as possible.In England, the swift spread of Delta variant has forced government officials to postpone the lifting of pandemic restrictions, called Freedom Day, which was to be June 21. That mutation is shared by other variants and may make monoclonal antibody treatments less effective.Scientists determined that the odds of the Delta variant spreading among members of a household was 64 percent greater than that of the B.1.1.7 variant first identified in Britain, which itself is considered both more contagious and more deadly than other variants.The trajectory of the Delta variant in the United States is unpredictable, but it could present serious challenges, particularly in regions like the South, where vaccination rates are low, and in the more than 100 U.S. counties where fewer than 20 percent of the population is vaccinated, said Dr. Michael Osterholm, director of the Center for Infectious Disease Research and Policy at the University of Minnesota.“This virus continues to throw curveballs at us,” he said.— Roni Caryn RabinJapan’s leaders are racing to lift Covid-19 vaccination rates at home, but that hasn’t stopped them from donating doses in the Asia Pacific region as part of a wider geopolitical strategy.Foreign Minister Toshimitsu Motegi of Japan said this week that the country would send a million doses of the AstraZeneca vaccine to Vietnam on Wednesday.