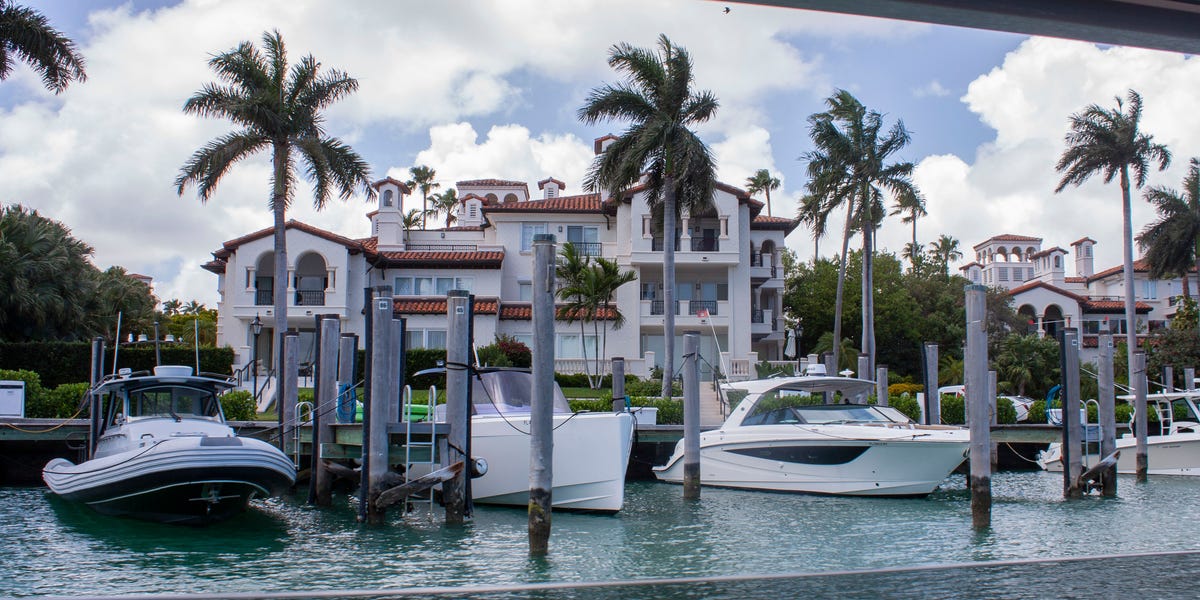 It has since become a haven for real-estate developers, finance bigwigs, high-powered litigation attorneys, and CEOs who live in nearly 30 luxury condominium buildings, where residences sell from $2 million to upwards of $40 million.According to local health authorities, more than half the population is over the age of 60 — making the community especially vulnerable to the novel coronavirus.To live on the island, residents pay a one-time fee of $250,000 to the Fisher Island Club — but only about 30% of members live on the island year-round, Dora Puig, Miami-Dade county&apos;s top real-estate agent by sales volume, told Business Insider last year. What unfolded over the next four days was a spotlight on the ultrawealthy Florida enclave that raised outrage from local officials, but, more than anything, highlighted yet another way in which money is making all the difference in how people in America are weathering the coronavirus pandemic.Here&apos;s everything we know about the status of coronavirus testing on Fisher Island.Fisher Island is a part of Miami-Dade County, but the timeline of events throughout March and early April shows the island reacted more quickly to the spread of the virus than the mainland parts of the county did.The first confirmed coronavirus case in Florida was reported on March 1. On April 13, The Miami Herald reported that Fisher Island had purchased thousands of antibody-detecting rapid blood tests from the University of Miami Health System (UHealth) — enough to test all 800 families and 400 employees on the island.At the time, Lisa Worley, a UHealth spokesperson, told the Herald, "This is what the Fisher Island residents wanted." According to The New York Times, Fisher Island bought 1,800 antibody tests that cost $17 each from UHealth, for a total of $30,600. One might even call them elite.According to an April 7 letter to Fisher Island residents that was viewed by Business Insider and signed by Dr. Elizabeth Greig, medical director of UHealth Fisher Island, the tests would be used to "monitor how spread occurs in a nearly contained environment, unlike anywhere else in the world." Greig neither confirmed nor denied to Business Insider that she had written the letter.Testing on the island, the letter detailed, would serve as a foil to a recent UHealth and Miami-Dade County partnership: As of April 3, a separate new program would randomly test 750 people across Miami-Dade County per week to assess how far the coronavirus has spread in South Florida.Participation would be voluntary, according to the letter, and testing would take place "building by building."In an April 14 statement emailed to Business Insider, Worley, the UHealth spokesperson, explained the factors taken into consideration pertaining to the island&apos;s request: "One of the first confirmed cases of coronavirus in Miami-Dade County was on Fisher Island, more than half of the population is over 60 and many residents were returning from the Northeast."The first people on Fisher Island were tested on April 6, and 1,250 residents and staff have been tested so far, island spokesperson Sissy DeMaria confirmed to Business Insider. And DeMaria told CNN that the island&apos;s philanthropic fund had contributed $150,000 to various relief organizations.In an April 14 statement to Business Insider, Worley acknowledged that Fisher Island&apos;s having obtained the coronavirus antibody tests "may have created the impression that certain communities would receive preferential treatment." The statement noted that UHealth was now "revising its process for reviewing testing outreach requests."Off the island, outrage spread swiftly across social media.As one Twitter user wrote, "Fisher Island, FL to be renamed Elysium. The superintendent&apos;s office later told Business Insider that $5 would provide breakfast and lunch for one child — meaning that Fisher Island&apos;s purchase could provide more than 6,000 children with two meals.In an April 15 press conference — two days after the Herald&apos;s first story on antibody testing on Fisher Island — DeSantis was asked about the noticeable lack of testing in underserved communities. The US is experiencing a shortage of testing materials, leaving it to fall behind every other developed nation in the rate of tests performed per capita.While some have called the coronavirus "the great equalizer," Fisher Island has proved to be yet another example of how differently a pandemic is experienced by the rich and the poor.The 39-year-old father, whose primary home is in the Miami suburb of Pinecrest and who considers Fisher Island his second home, told Business Insider he was happy with how the island was handling the lockdown and the antibody testing."To most people [on the island], they think it&apos;s cool to have that as an advantage," he said.