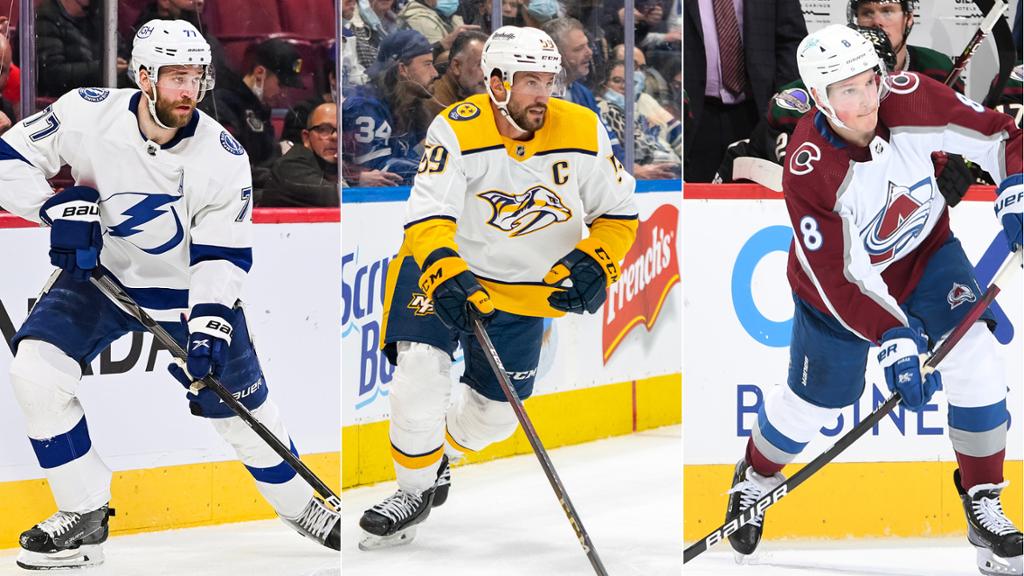 Welcome to NHL.com, the official site of the National Hockey LeagueBienvenue à LNH.com , le site officiel de la Ligue nationale de hockeyTervetuloa NHL:n viralliselle nettisivustolle NHL.comiinVälkommen till NHL.com, NHL:s officiella web-sidaVítejte na NHL.com, oficiálních stránkách National Hockey LeagueVitajte na NHL.com, oficiálnych stránkach National Hockey LeagueWillkommen auf NHL.com, der offiziellen Seite der National Hockey LeagueBienvenido a NHL.com, el sitio oficial de la National Hockey LeagueVictor Hedman, Roman Josi and Cale Makar were named finalists for the Norris Trophy on Monday.The award is given annually to the defenseman voted to have demonstrated throughout the season the greatest all-around ability at the position and the winner will be announced as part of the 2022 NHL Awards during the Conference Finals or Stanley Cup Final.Hedman finished third among defenseman in scoring with 85 points (20 goals, 65 assists), third in goals and second in assists in 82 games for the Tampa Bay Lightning this season, was first in power-play points (38), tied for first in game-winning goals (six), fifth in shots on goal (219) and had a plus-26 rating. Reaching it after (age 30) is great, but I feel like I'm getting better with age and hopefully that continues."Josi led defenseman in scoring with 96 points (23 goals, 73 assists), power-play goals (11) and shots on goal (281) in 80 games for the Nashville Predators, becoming the first defenseman to score at least 90 points in a season since Ray Bourque (91) did so for the Boston Bruins in 1993-94. Josi, who averaged 1.20 points per game, had a 13-game point streak from March 2-27, scoring 28 points (four goals, 24 assists), the longest ever by a Predators defenseman, and tied with Makar for the longest by an NHL defenseman this season."Definitely a huge honor," Josi said. So it's definitely a huge honor to be nominated with those guys."A finalist for the second time, winning the award in 2019-20, Josi helped the Predators (45-30-7) qualify for the playoffs for the eighth straight season."I think when you look at what he brings to the table, I mean, from a defensive perspective, he plays hard minutes, plays a lot of minutes." Predators coach John Hynes said. Makar was sixth in the NHL in average ice time per game (25:40) and scored seven goals in a five-game goal-scoring streak from Nov. 17-26, and 21 points (three goals, 18 assists) in a 13-game point streak from Feb.13-March 8."Not surprised at all," Avalanche forward Andre Burakovsky said.

As said here by David Satriano