How Russia Meddles Abroad for Profit: Cash, Trolls and a Cult Leader 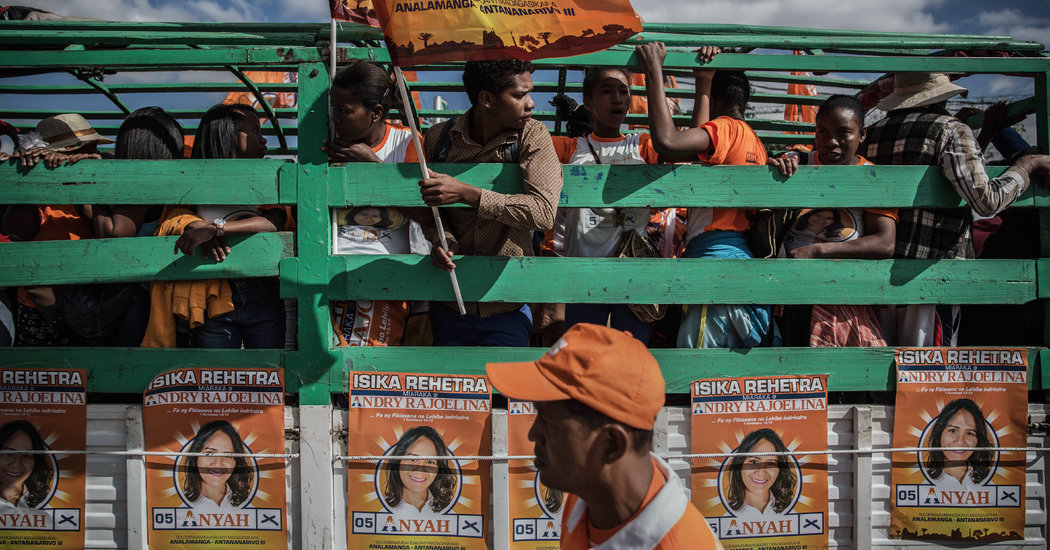 They showed up with armed bodyguards at campaign offices to bribe challengers to drop out of the race to clear their candidate’s path.At Madagascar’s election commission, officials were alarmed.“We all recall what the Russians did in the United States during the election,” said Thierry Rakotonarivo, the commission’s vice president. “They said, ‘If you ever need money, we are going to pay all the expenses.’”But while Russia’s efforts in the United States fit Moscow’s campaign to upend Western democracy and rattle Mr. Putin’s geopolitical rivals, the undertaking in Madagascar often seemed to have a much simpler objective: profit.Before the election, a Russian company that local officials and foreign diplomats say is controlled by Mr. Prigozhin acquired a major stake in a government-run company that mines chromium, a mineral valued for its use in stainless steel. Western diplomats had, in fact, been concerned that the president was trying to delay the vote.“I am convinced,” the president’s letter said, “that certain forces will attempt to call into doubt” the election.Mr. Rajaonarimampianina confirmed that the signature on the letter was his and acknowledged meeting Mr. Zakhariyash in Madagascar, but he said he did not recall writing the letter.Mr. Zakhariyash, who did not respond to repeated requests for comment, was later quoted by RIAFAN, a Russian news outlet connected to companies owned by Mr. Prigozhin, blaming the United States, Britain and France for interfering in the Madagascar elections.Local residents hired by the Russian operation in Madagascar described Mr. Zakhariyash as “the boss.” Likewise, one of the Russian unit’s internal spreadsheets identified him as the “head of department.” He is also one of two authors of a confidential report detailing plans for the Madagascar campaign, including the creation of a “troll factory” to focus on social media, echoing the tactics Mr. Prigozhin is accused of unleashing on the United States.The documents — along with text exchanges and emails between Russian operatives — were obtained and analyzed by the Dossier Center, a London-based investigative organization founded by Mr. Putin’s longtime nemesis, the former oil billionaire Mikhail B. Through interviews with officials, candidates and local operatives in Madagascar, The New York Times independently confirmed much of the information in the documents, which the Dossier Center said were provided by moles working within Mr. Prigozhin’s organization.The spreadsheets name more than 30 Russians working in the country ahead of the election, calling them media managers, lawyers, translators and a “counterpropaganda technologist.” People in Madagascar hired by the Russians to work on the campaign verified many of the operatives’ identities. That’s why it all fell apart.”Nearly two decades ago, André Christian Dieudonné Mailhol, the founder and pastor of the Church of the Apocalypse, said he received a message from God that he would be president of Madagascar one day.He did not predict, however, that three Russians would turn up like Magi on his doorstep 18 years later with an offer to help fulfill that prophecy.“They said that they came here to help me with the presidential election,” he said.The three gathered in his brightly painted living room in 2018, peppering him with questions: “How old are you? I was O.K. with that.”The strategy of supporting so-called spoiler candidates is another echo of the 2016 plot to subvert the American election, in which Russian social media bots encouraged support for figures like Jill Stein, the Green Party candidate — as a way, officials say, to draw votes away from Hillary Clinton.Pastor Mailhol said his Russian team wrote some of his speeches and paid for campaign posters and television advertising. Over four meetings, Mr. Zafimahaleo said, the Russians tried to pressure him to support a delay in the election so that the incumbent had more time to campaign.“They made big promises,” Mr. Zafimahaleo said. In one text message, Mr. Ignatovsky, who helped oversee the operation, describes Madagascar as a “black hole.” One of his colleagues complains that “everything is ass-backward,” and that the “unhappy locals” were impeding the team’s work.But the Russians were setting off alarms, too.An op-ed in a local newspaper warned that after meddling in the United States, Russia had set its sights on Madagascar.“Russia badly wants to make good use of its impressive experience in destabilization” by intervening in Madagascar, the article said. “How could they know that I will lose the election?” he said.In the first round, he received less than 9 percent of the vote, finishing a distant third.The Russians shifted their support to Mr. Rajoelina, a young former mayor who had been Madagascar’s transitional president after a coup in 2009.In the campaign’s final weeks, Pastor Mailhol said, the team of Russians made a request: Drop out of the race and support Mr. Rajoelina.