Is Dan Crenshaw the Future of the GOP? 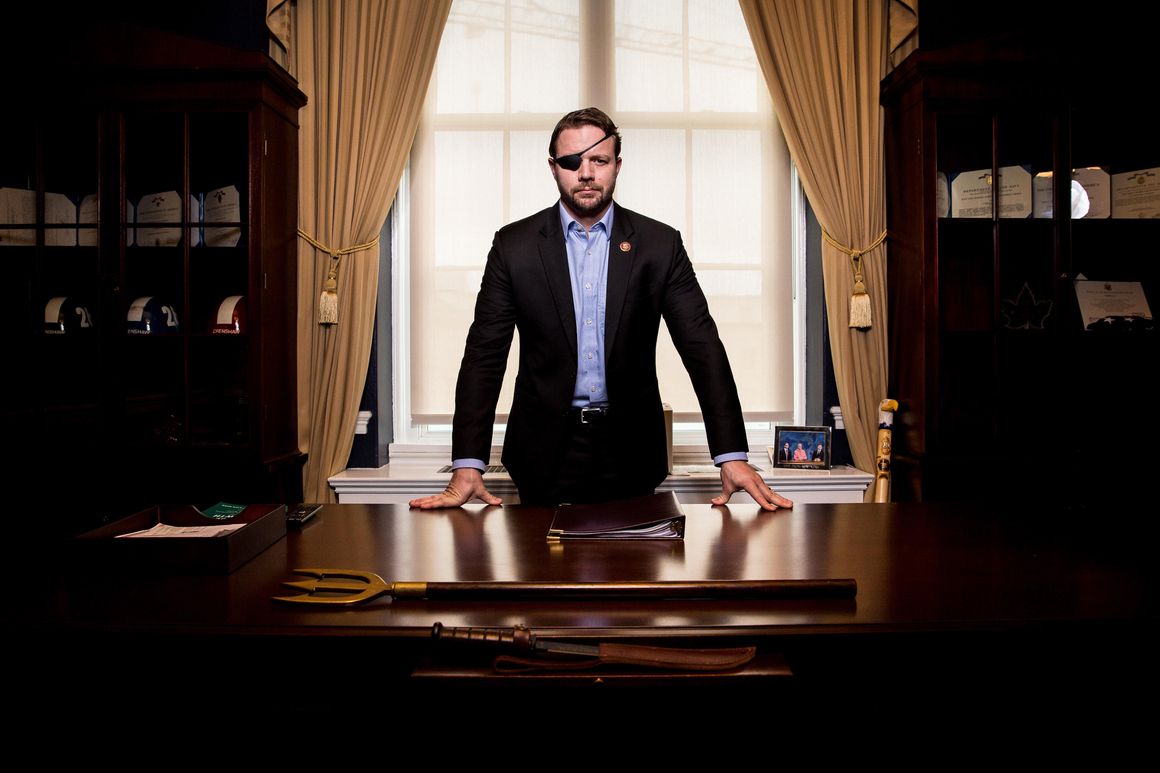 In fact, Crenshaw has praised the president for his policies on immigration, even recently voting in support of Trump’s declaration of a national emergency to build a border wall, a move many conservatives opposed.One type of success in today’s Republican Party involves becoming a Trump booster, like Florida Congressman Matt Gaetz, a 36-year-old in his second term who unfailingly defends the president on TV. Crenshaw is only two months into the job, but he might just offer the possibility that the future of the Republican Party could be more conservative than Trumpist—if he can chart his own course in Washington.***When Crenshaw first grabbed the national spotlight, he seemed to succeed, at least for one night, in his improbable mission to prove that a conservative politician could be cool.The weekend before the 2018 midterm elections, “Saturday Night Live” comedian Pete Davidson mocked Crenshaw’s physical appearance, saying the wounded veteran’s eye patch made him look like a “hitman in a porno movie.” When “SNL” invited Crenshaw on the show the next week, he agreed and, after ribbing Davidson, provided a rare moment of political unity. We can remember what brings us together,” Crenshaw said, before telling viewers to “never forget the sacrifices of veterans past and present, and never forget those we lost on 9/11, heroes like Pete’s father,” a firefighter who died trying to save those trapped in the World Trade Center.“I thought that he had a lot of maturity and gentleness in his response to it, which seems increasingly rare nowadays,” says Foster, the 18-year-old Trump critic at CPAC, who recently accepted an appointment to attend West Point. These are the ones who get elevated.” But now that he’s in Washington, Crenshaw has also continued to criticize his own—whether Congressman Steve King of Iowa (“We don’t need guys like that,” Crenshaw told me when asked whether King should leave Congress) or Donald Trump.Two weeks before he took office, Crenshaw wrote an op-ed in the Washington Post urging the president to reverse his decision to withdraw all U.S. troops from the fight against ISIS in Syria. “I understand pretty well what the mission is and why it should continue.” Crenshaw also believes, in defiance of Trump, that Congress should take back the authority it ceded long ago to the executive branch to impose tariffs.But Crenshaw is happy to support the president, or challenge his critics, when the two agree. We know what we’re getting with the president.” In addition to saying he is “proud to stand with the Trump administration” in support of the Venezuelan people, Crenshaw has been an enthusiastic advocate for Trump’s push to build a wall on the Southern border. He is simply putting more money towards his faithful execution of the law than was allowed by Congress,” Crenshaw says. “It’s my goal to help them see: Think what you want about him, but please focus on the policies and the general approach to governance we’re taking,” Crenshaw says. “Think what you want about [Trump], but please focus on the policies and the general approach to governance we’re taking,” says Crenshaw, shown at his congressional office in Washington. Andrew Surabian, a former Trump White House official who worked under Steve Bannon, says of Crenshaw: “While he has some views that are different from the president, he has put himself in a position where he is still an ally to the administration on the whole.” Liz Mair, a NeverTrump Republican consultant, says politicians who share Crenshaw’s ideology “struggle to get traction a lot of the time because they just seem like boring, mainstream, conservative Republican dudes,” but Crenshaw “could become a much bigger player in the party if he chooses to.”As his experience on the national emergency shows, however, it’s not easy taking a middle-ground approach to Trump. But the Trump-skeptical conservatives left in the Republican Party don’t seem to have written off Crenshaw because of his support for the emergency declaration. Ben Shapiro, who supports rescinding the emergency, wrote in a text message: “There’s a legitimate difference of opinion on the issue.” At CPAC, Jacob Foster, who also opposed the emergency declaration, told me he thinks Crenshaw was representing his constituents and wouldn’t set such a “dangerous precedent” if he were president.“I think he’s got an incredible future,” says Shapiro, who would be happy to see Crenshaw launch a presidential campaign before turning 40.

As said here by Jack Shafer