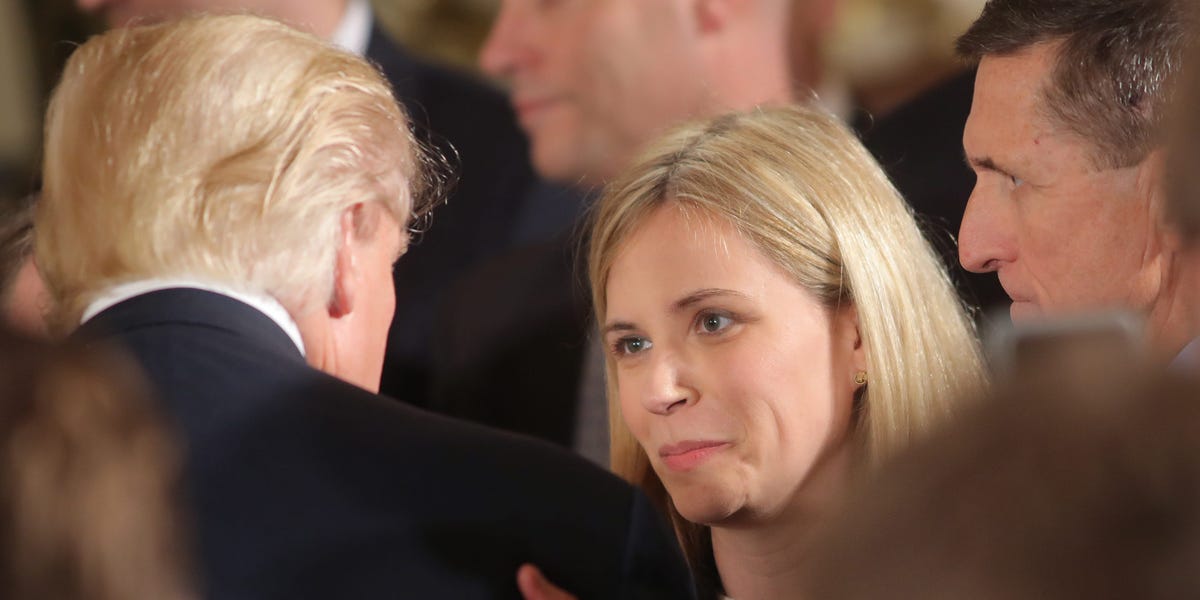 A powerful Republican central to the president&apos;s 2020 reelection bid was part of a more concerted effort than previously known to remove him from the ballot in 2016, sources told Insider.The maneuvers of Katie Walsh and, to a lesser degree, her husband, Mike Shields, have been discussed quietly among some of President Donald Trump&apos;s closest advisers for years. Instead of the "Never Trump" Republicans tossing bombs from the outside, this time it was the party leadership itself.Republicans familiar with Walsh&apos;s and the RNC&apos;s discussions about Trump also said that Walsh, Shields, and Priebus had worked to protect Trump as the nominee at the convention in Cleveland that July. Gates also said that Priebus broached the idea with Paul Manafort, who in the spring of 2016 had taken over as the Trump campaign&apos;s chairman to help ensure he secured the nomination at the Cleveland convention."There was absolutely a movement by Reince and the RNC to remove Trump on several occasions during the 2016 campaign," said Gates, who plans to detail those efforts in a tell-all book set to be published in October.Some Republicans who spoke with Walsh and Priebus heard their comments as a definitive attempt to depose Trump. Shields was a part of some but not all of those talks, a Republican familiar with the meetings said."Here&apos;s a guy who came to the process as an outsider — at every turn they wanted to get rid of him," said Gates, who joined the Trump team as Manafort&apos;s deputy and then remained as the 2016 campaign liaison to the RNC despite Manafort&apos;s ouster that August.Booting Trump from the ticket took on a new level of importance on October 7, 2016, when The Washington Post published the hot-mic tape of Trump bragging that he could grope women because he was rich and powerful. Republicans close to the campaign said the nonprofit watchdog only scratched the surface of the financial arrangements among Parscale, Walsh, and Shields.Inside Trump&apos;s campaign, advisers have long said the president doesn&apos;t have a problem with his aides earning a living — but he doesn&apos;t want staffers earning money he believes is rightfully his or taking credit for his victories. But the couple also went far beyond Parscale in terms of cashing in on Trump&apos;s presidency, Trump advisers who spoke with Insider said.2020 hasn&apos;t been kind to Walsh and Shields.At the start of the year, alongside Parscale and Kushner, they had an iron grip on running the president&apos;s reelection campaign, as well as the expansive Republican Party. A new power center emerged in Trump&apos;s world around Stepien and Jason Miller, a senior adviser who worked on the 2016 campaign and is back for a cameo in 2020.Parscale&apos;s demise meant something else too: He was no longer able to protect Walsh and Shields, his informal business partners, Trump advisers said.After Insider reported last month that the Trump campaign was conducting an internal audit of the campaign spending overseen by Parscale, Trump advisers began asking whether it would move beyond Parscale to focus on Walsh&apos;s and Shields&apos; financial arrangements."As the onion gets peeled, Brad was the first to fall," one Republican close to the campaign said, adding that Walsh and Shields had been propping up Parscale and supporting him from outside attacks to protect their own financial arrangements. "You&apos;re missing the point: It wasn&apos;t Brad, it was Walsh and Shields," the Republican said.But inside the Trump campaign, there is little expectation that the internal review will dig deep into past operations. They speculated about whether Walsh and Shields would be exiled from Trump&apos;s political operation as many other ambitious operatives had been.So far, Republicans close to the president told Insider that Walsh and Shields are still in Trump&apos;s good graces thanks to Kushner&apos;s status in the White House.Shortly after this reporter emailed a Kushner aide for comment, Walsh&apos;s lawyer wrote back with another threatening text message: "You have reached out to witnesses and in so doing continued to re-publish false and defamatory information.

As said here by Tom LoBianco