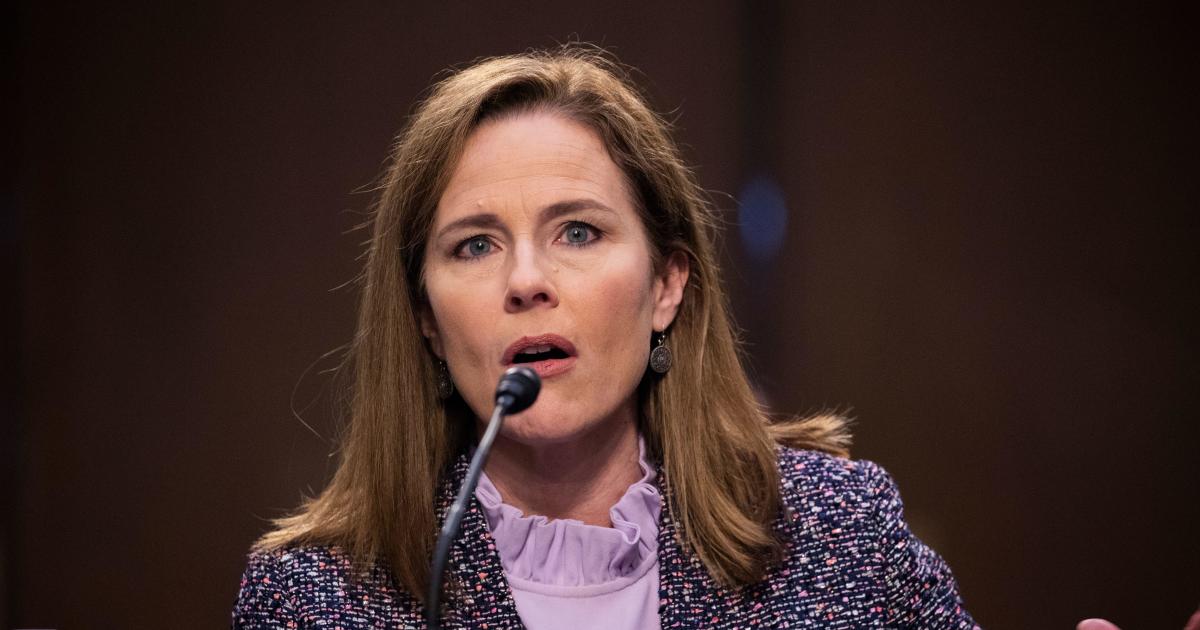 Holder, which gutted a key provision of the landmark civil rights law, and cited several states — predominantly in the South — that have implemented changes to their voting procedures in the wake of the Supreme Court's 5-4 decision, including the closure of polling places and efforts to remove voters from the rolls.The California senator asked Barrett whether she agrees with Chief Justice John Roberts' assertion that voting discrimination still exists."I will not comment on what any justice said in an opinion, whether an opinion is right or wrong or endorse that proposition," Barrett said, adding she would not "endorse the majority or the dissent in Shelby County."The judge did say she believes "racial discrimination still exists in the United States, and I think we've seen evidence of that this summer.""I'm not going to express an opinion because these are very charged issues," Barrett said. Hodges."I made no commitments on any of these cases or on any case," Barrett said, reiterating what she said on Tuesday about not making any "pre-commitments" to the White House.Crapo also asked Barrett whether she believed anyone was above the law, following Democrats' questions about whether the president could pardon himself."No one is above the law in the United States," she said.Democratic Senator Cory Booker, who focused many of his questions Tuesday on human rights issues, began Wednesday by asking Barrett about her opinion on separating the children of migrants from their parents at the border."That's been a matter of policy debate, and obviously that's a matter of hot political debate, in which I can't express a view or be drawn into as a judge," Barrett replied.Booker asked for her personal views on the practice, which was harshly criticized and ultimately reversed by the Trump administration. "I don't think that my views on global warming or climate change are relevant to the job I would do as a justice."Senator Josh Hawley, a Republican from Missouri, invoked the 1987 failed nomination of Judge Robert Bork to the Supreme Court to characterize Democrats' opposition to Barrett's appointment to the Supreme Court."The legacy of the Bork hearings continues to reverberate. Barrett did not directly answer, but said she believed that Griswold is "very, very, very, very, very unlikely to go anywhere."Sen. Chris Coons (D-Delaware) tells Barrett he's concerned her confirmation "may launch a new chapter of conservative judicial activism unlike anything we've seen in decades""With all due respect, I will be voting against your confirmation, your honor" https://t.co/Xy3Sl57gsC pic.twitter.com/QbGOAjxcyXMinnesota Senator Amy Klobuchar, a Democrat, raised Barrett's work as a young lawyer for the Republican side in Bush v. "I think the public has a right to know that now three of these justices have worked on the Republican side on a major, major issue related to a presidential election."Klobuchar also asked Barrett whether she had ever voted by mail, though the judge said she could not recall.Democratic Senator Amy Klobuchar said that Barrett will be the "deciding vote" in several cases, implying that Chief Justice John Roberts may side with the four liberal justices on the court on certain issues. She also said that an article she wrote published in 2017 criticizing Roberts' legal position in a case upholding the ACA was not an "open letter" to the president.Although Barrett must sit through one more day of confirmation hearings, her eventual confirmation to the Supreme Court is all but a foregone conclusion. Democratic Senator Sheldon Whitehouse acknowledged in his questioning that Barrett was likely to be confirmed to the Supreme Court.Senator Ted Cruz began his questioning by saying that the day's questioning had shown that "Judge Barrett is going to be confirmed by this committee and by the full Senate."Cruz also criticized his Democratic colleagues for not sitting through the hearing. Several lower courts do allow cameras, including the 7th Circuit Court of Appeals, where Barrett is currently a judge.Democratic Senator Patrick Leahy, who spoke next, began his round of questioning by signaling his agreement with Grassley on the importance of introducing cameras into the court."I agree with him on that," Leahy said.Pressed by Feinstein about whether she shares the views of the late Justice Antonin Scalia on the Voting Rights Act of 1965, Barrett called it a "triumph in the civil rights movement" and reiterated that she would not be a carbon copy of the late justice."When I said that Justice Scalia's philosophy is mine too, I certainly didn't mean to say that every sentence that came out of Justice Scalia's mouth or every sentence that he wrote is one that I would agree with," she said, adding that she would, however, approach cases in the same manner he did.Barrett declined, however, to say whether she agrees with Scalia's characterization of the landmark civil rights law as a "perpetuation of racial entitlement.""I don't obviously know what Justice Scalia was thinking when he said that, and any characterization of the Voting Rights Act or a statement like that is simply really not something that I can opine on because that's tied in with these Shelby County questions," she said. Holder, the Supreme Court gutted a central provision of the Voting Rights Act that required jurisdictions with a history of race-based voter discrimination to receive approval from the federal government before making changes to their voting procedures and laws.Senator Dianne Feinstein, the top Democrat on the Judiciary Committee, announced the four outside witnesses who will testify at the invitation of Democrats on Thursday, the fourth and final day of Barrett's confirmation hearing.The witnesses are:Chairman Lindsey Graham began the third day of Barrett's confirmation hearing at 9:01 a.m. and offered glowing remarks about Barrett, praising her for not cowering when pressed about her personal views on abortion and her faith."I'm highly confident that you would judge every American based on their case, not the law of Amy," he said.