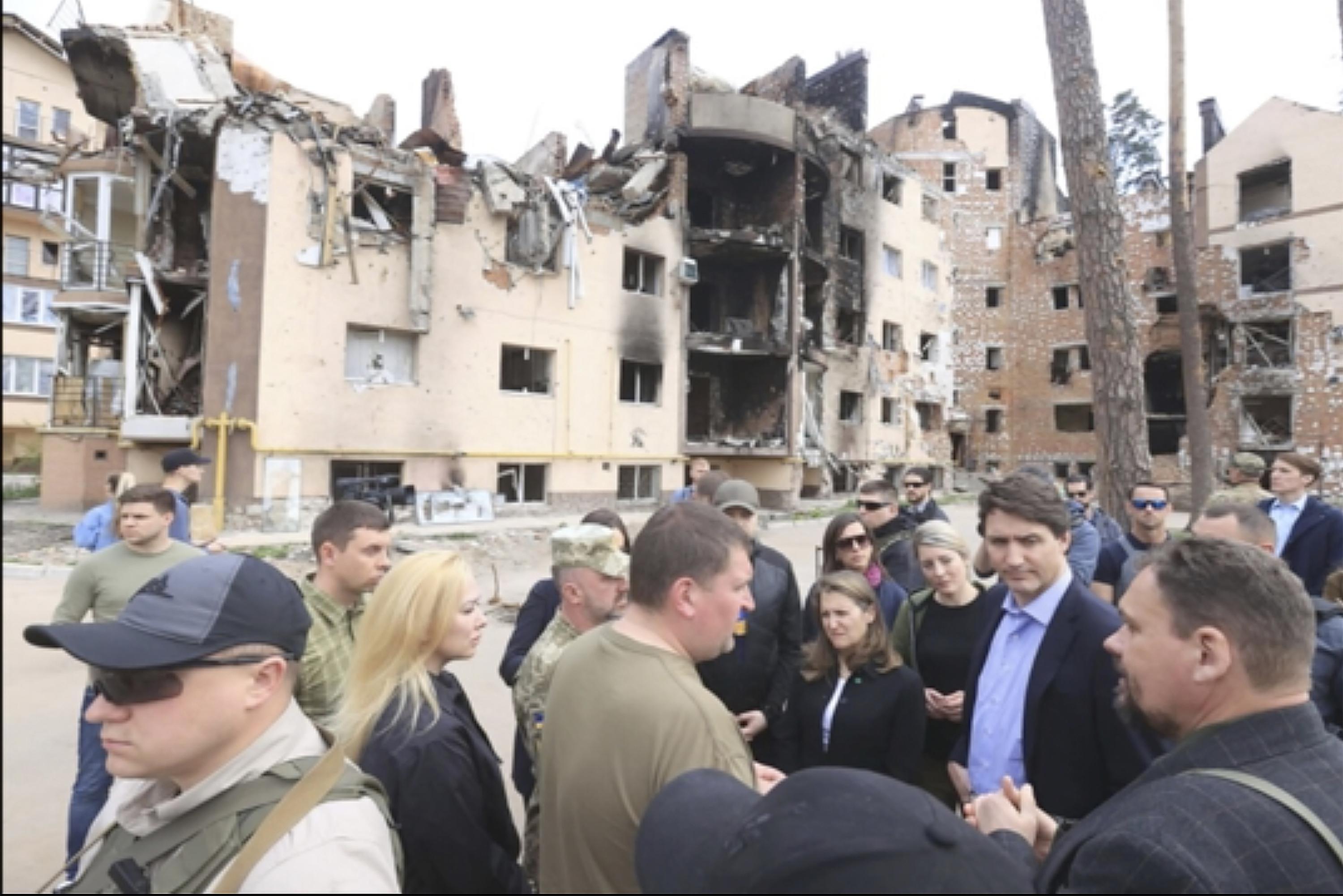 The town is considered a possible war crimes site.___KEY DEVELOPMENTS IN THE RUSSIA-UKRAINE WAR:— Dozens of Ukrainians feared dead after Russian strike on school— Patriotism, unease mix in Russia ahead of big Victory Day celebrations— G-7 leaders call Ukraine’s president, vow to ban or cut back on Russian oil imports— Jill Biden makes surprise Mother’s Day visit to Ukraine, meets first lady there— Ukrainian volunteers work to craft body armor, camouflage nets for soldiersFollow all AP stories on Russia’s war on Ukraine at https://apnews.com/hub/russia-ukraine___OTHER DEVELOPMENTS:KYIV, Ukraine — Leaders from the Group of Seven developed democracies pledged Sunday to phasing out or banning the import of Russian oil, as they met with Ukraine’s president, Volodymyr Zelenskyy, for online talks to stress their support and to display unity among Western allies on Victory in Europe Day, which marks Nazi Germany’s surrender in 1945.Cutting out Russian oil supplies “will hit hard at the main artery of (President Vladimir) Putin’s economy and deny him the revenue he needs to fund his war,” the G-7 countries, which include the U.S., Britain, Canada, Germany, France and Italy and Japan, said in a statement. Russian shelling also killed two boys, ages 11 and 14, in the nearby town of Pryvillia, he said.___KYIV, Ukraine — The Norwegian parliament speaker joined the slew of top Western officials meeting with Ukrainian President Zelenskyy and other leaders in Kyiv on Sunday.According to a statement by the Ukrainian presidential press service, Zelenskyy thanked Masud Gharakhani, president of the Norwegian Storting, for Norway’s transfers of defensive weapons to Ukraine, as well as its financial support and humanitarian aid.Speaking in Kyiv on VE Day, Gharakhani said:“Today, my country celebrates the day when we managed to regain our democracy and independence after the Second World War. Unfortunately, your country is again facing aggression and violence.”Gharakhani also joined his Ukrainian counterpart, Ruslan Stefanchuk, in laying flowers at the Kyiv memorials to those who died in World War II and the ongoing Russian-Ukrainian war.In addition, he met with Ukraine’s premier Denys Shmygal, who later said on Twitter that the two had discussed “defense, energy support to Ukraine” and that the Norwegian proposed the joint creation of rehabilitation centers for veterans in Ukraine.___KYIV, Ukraine — Ukraine’s foreign minister says he spoke with U.S. Secretary of State Antony Blinken.Dmytro Kuleba made the comment Sunday on Twitter.He added: “New stiff U.S. sanctions on Russia are coming. He also expressed confidence in Berlin’s official support for granting Ukraine E.U. candidate status.“We really appreciate that on the Day of Remembrance and Reconciliation itself, and in what for us is such a trying time of war, the President of the German Bundestag Bärbel Bas came to support Ukraine,” said a post published Sunday afternoon on Zelenskyy’s Telegram channel.The Time of Remembrance and Reconciliation for those who died in World War II, marked on May 8 and 9, is an annual international day of remembrance designated by a 2004 U.N. resolution.In an interview with the German newspaper Rheinische Post, Bas called her meeting with Zelenskyy “very good and friendly,” adding that she had come to Ukraine because she felt it “was important to me to personally express Germany’s solidarity with Ukraine” to him.She added that Germany will do everything in its power to support Ukraine, including backing its efforts to join the European Union and providing aid to help with rebuilding.___MARIUPOL, Ukraine — To demonstrate success in time for Russia’s key Victory Day holiday on Monday, the Russian military worked Sunday to complete its takeover of the southern Ukrainian port city of Mariupol, which has been under relentless assault since the start of the war.

As said here by The Associated Press