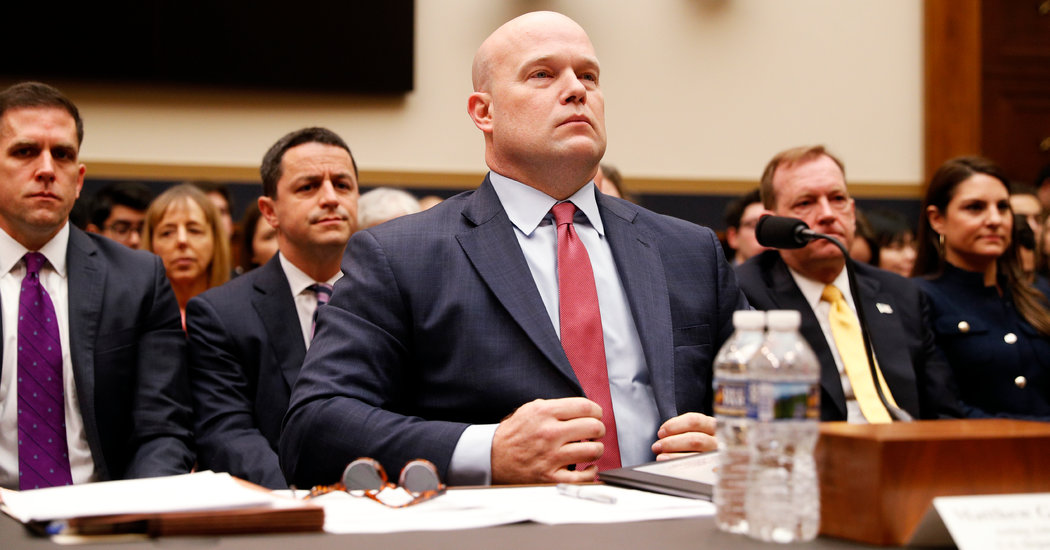 Whitaker declined to defend the special counsel’s investigation, as his predecessor and likely successor at the Justice Department have doneBut Mr. Whitaker declared that he had “not interfered in any way” in the special counsel investigation and that he had provided no information about it to President Trump or White House officials.Mr. Whitaker said multiple times that he did not discuss the Mueller investigation with anyone at the White House, even though in July 2017 he interviewed to become a White House lawyer who would manage and respond to that inquiry.Mr. Whitaker’s predecessor overseeing the special counsel investigation, Rod J. I’ve received the briefings myself, and I’m usually the endpoint at that information.”Mr. Whitaker ultimately declared that though he had been briefed, he had followed “the special counsel’s regulations to a T.”“There’s been no event, no decision that has required me to take any action, and I’ve not interfered in any way with the special counsel’s investigation,” he said.One moment in Mr. Whitaker’s testimony raised a potential conflict with news reports about events that led up to the Trump administration’s hiring of him.Pressed by Representative Zoe Lofgren, Democrat of California, to say whether he had spoken to Mr. Trump, his family, White House officials, or outside surrogates like Rudy Giuliani about his views of the Mueller investigation before he joined the Justice Department in the fall of 2017, Mr. Whitaker said definitively that he had not.But, as The New York Times has reported, in July 2017 Mr. Whitaker interviewed with Donald F. “No, congressman.”Despite reports that Mr. Trump admonished Mr. Whitaker after those developments, the acting attorney general also said, “I did not talk to the president about the Mueller investigation.”Mr. Whitaker said that he was not involved in the Justice Department’s controversial decision to reimpose restrictions on online gambling. The other was his close work with Jeff Sessions, the former attorney general he served as his chief of staff.“I think the president was comfortable that to continue the momentum at the Department of Justice we had established in addressing these important priority issues like reducing violent crimes, combating the opioid crisis and others, that the president felt I was best positioned to do the duties of attorney general,” Mr. Whitaker said.Mr. Whitaker told Representative Zoe Lofgren, Democrat of California, that he would not discuss his decision to say last month that the Mueller inquiry was drawing to a close, citing the fact that it is an ongoing investigation. “Since that time, we have obtained new documents showing that you failed to return thousands of dollars that were supposed to be distributed to the victims of World Patent Marketing alleged fraud, despite your involvement with Mr. Cooper in handling complaints from individuals of the company’s actions.”A federal judge shut the company down last year and fined it nearly $26 million.Mr. Whitaker tried to set the tone for the back and forth with lawmakers by saying in his opening statement that he would not answer questions about his conversations with Mr. Trump.“I will continue the longstanding Executive Branch policy and practice of not disclosing information that may be subject to executive privilege,” he said.That answer did not satisfy the chairman, who said he expected Mr. Whitaker to consult the Justice Department and White House to return “in the coming weeks” for a transcribed deposition.“Any questions that are unanswered today or require consultation with the White House will be asked again at that proceeding, and I expect a clean answer or a proper assertion of privilege,” Mr. Nadler said.[Sign up for Crossing the Border, a limited-run newsletter about life where the United States and Mexico meet.]Katie Benner covers the Justice Department.