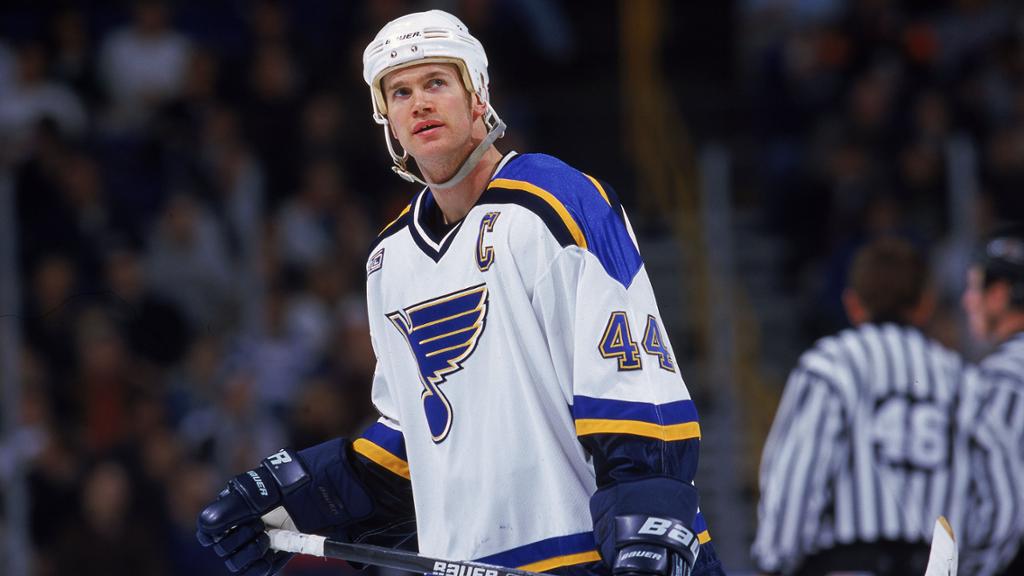 We talk to key figures in the game, gaining insight into their lives on and off the ice.This edition features Hockey Hall of Fame defenseman Chris Pronger.Chris Pronger will have his No. 44 retired by the St. Louis Blues on Monday before their game against the Nashville Predators at Enterprise Center.The defenseman played 598 games during nine seasons with the Blues from 1995-2004, scoring 356 points (84 goals, 272 assists). He won the Hart Trophy as the NHL's most valuable player and the Norris Trophy as the best defenseman in 1999-2000, when the Blues also won the Presidents' Trophy for having the best record in the NHL.Pronger finished in the top five in Norris Trophy voting five times with the Blues.He finished his NHL career with 698 points (157 goals, 541 assists) in 1,167 games with the Hartford Whalers, Blues, Edmonton Oilers, Anaheim Ducks and Philadelphia Flyers from 1993-2012. He spent three seasons working in the NHL Department of Player Safety and was an executive in hockey operations with the Florida Panthers from 2016-20.Pronger, 47, stepped down from his role with the Panthers on July 8, 2020, to focus on his family's business, Well Inspired Travels, a luxury travel company founded by Pronger and his wife, Lauren.NHL.com caught up with Pronger and talked about having his number retired by the Blues, his business and some memories of his time with St. Louis.What does having your number retired mean to you and how does it impact you to have this happen and join the rafters with the likes of Al MacInnis (2), Bob Gassoff (3), Bob Plager (5), Barclay Plager (8), Brian Sutter (11), Brett Hull (16) and Bernie Federko (24)?"It's an honor. I think when you look at my tenure here if you will, I got here as a 20-year-old quasi-kid and left a 30-year-old man with a wife and two kids and a lot of knowledge about the game and life. We just matched up and we were very in tune because we played together so much."Video: Chris Pronger was Hart Trophy-winning defensemanDo you think without the lockout in 2004-05 and no NHL salary cap put in place that you would have continued with the Blues and finished your career in St. Louis?"I don't know. I guess how people looked at me and looked at my career and looked at how I played the game and how I led there were a lot of questions about me or asked of me when I was here in St. Louis. That to me is the most interesting part, learning about how other people view life and how they deal with the day-to-day world we live in, the different pressures and demands on their time."When I was playing, I'd watch other players and watch other games and pick out little things you could add to your repertoire, into your game. You watch how people handle the pandemic, how they handle stress, how they deal with raising kids, all the things we deal with on a day-to-day basis and you're able to learn by paying attention, talking to people and listening to what they have to say."What was the strangest, weirdest or craziest thing that you can think of that happened to you during your NHL playing career?"Well, having a slap shot go off my heart and it skipping a beat and me going down was not the easiest of things. [Blues general manager] Larry [Pleau] said, 'Let's just get it fixed.' I said, 'If I get it fixed I need it to be good, I'm not going to rush back.'"Of course, I get it fixed and we come back from the All-Star break and the team isn't playing good so all of a sudden it's, 'Hey, you need to come back.' I'm not ready, but I rush back and, typical, the first game I get a slap shot from my own teammate go off of my arm and it shatters my arm. NHL, the NHL Shield, the word mark and image of the Stanley Cup, Center Ice name and logo, NHL Conference logos, NHL Winter Classic name, and The Biggest Assist Happens Off The Ice are registered trademarks and the Stanley Cup Playoffs logo, Stanley Cup Final logo, Stanley Cup Qualifiers name and logo, NHL.TV, Vintage Hockey word mark and logo, The Game Lives Where You Do, NHL Winter Classic logo, NHL Heritage Classic name and logo, NHL Stadium Series name and logo, NHL All-Star logo, NHL Face-Off name and logo, NHL Premium, NHL After Dark, NHL GameCenter, NHL GameCenter LIVE, NHL Network name and logo, NHL Tonight name and logo, On The Fly, NHL Network Showdown name and logo, NHL Awards name and logo, NHL Draft name and logo, NHL Mascots, Hockey Fights Cancer, Because It's The Cup, NHL Green name and logo, NHL Vault, Hockey Is For Everyone, NHL Thanksgiving Showdown name and logo, NHL Centennial Classic name and logo, NHL Centennial Season logo, NHL100 Classic name and logo, NHL Global Series name and logo, NHL China Games name and logo, NHL Power Players name and logo, NHL Outdoors at Lake Tahoe name and logo, NHL Street name and logo, and Don't Miss A Moment are trademarks of the National Hockey League.

As said here by Dan Rosen