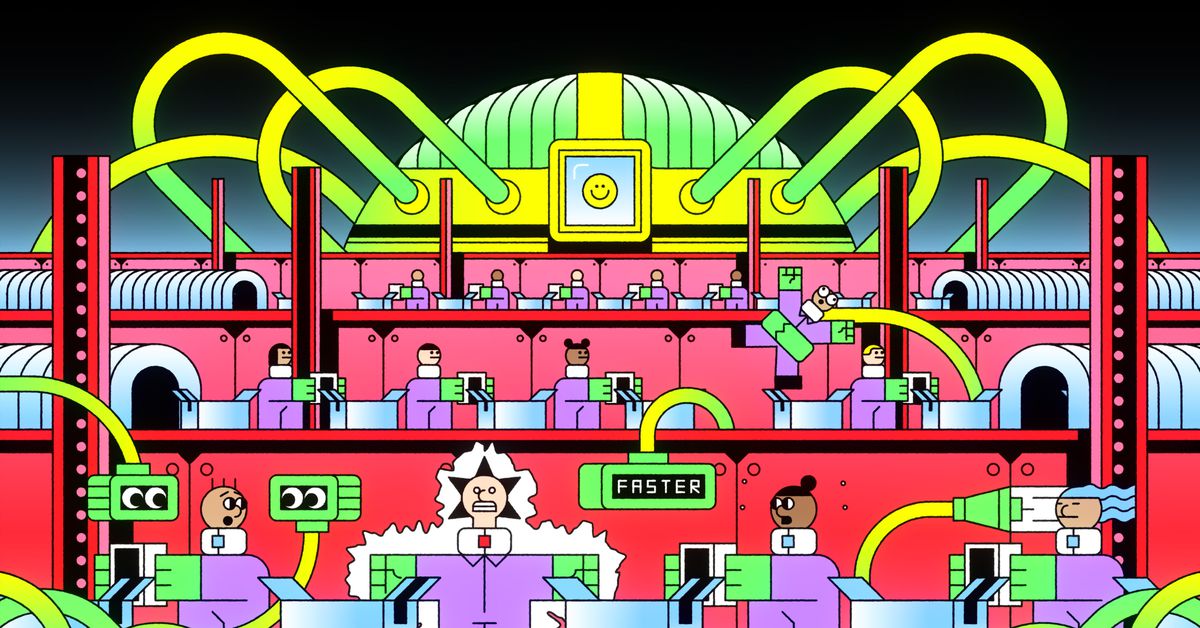 Filed under:In warehouses, call centers, and other sectors, intelligent machines are managing humans, and they’re making work more stressful, grueling, and dangerousOn conference stages and at campaign rallies, tech executives and politicians warn of a looming automation crisis — one where workers are gradually, then all at once, replaced by intelligent machines. The robots are here, they’re working in management, and they’re grinding workers into the ground. (Amazon said its system notifies managers to talk to workers about their performance, and that all final decisions on personnel matters, including terminations, are made by supervisors.)Jake, who asked to use a pseudonym out of fear of retribution, was a “rebinner.” His job was to take an item off a conveyor belt, press a button, place the item in whatever cubby a monitor told him to, press another button, and repeat. Every Amazon worker I’ve spoken to said it’s the automatically enforced pace of work, rather than the physical difficulty of the work itself, that makes the job so grueling. “They would just lay back in their car and fall asleep.” A worker in Minnesota said that the job had been algorithmically intensified to the point that it called for rethinking long-standing labor regulations. All they have to do is work real fast.” There are robots of the ostensibly job-stealing variety in Amazon warehouses, but they’re not the kind that worry most workers. The robots were so efficient that more humans were needed in other roles to keep up, Amazon built more facilities, and the company now employs almost three times the number of full-time warehouse workers it did when the robots came online. The emergence of cheap sensors, networks, and machine learning allowed automated management systems to take on a more detailed supervisory role — and not just in structured settings like warehouses, but wherever workers carried their devices. Why get too worked up over conditions for warehouse workers, taxi drivers, content moderators, or call center representatives when everyone says those roles will be replaced by robots in a few years? Like many call center jobs, the work was stressful: customers were often distraught, software tracked the number and length of her calls, and managers would sometimes eavesdrop on the line to evaluate how she was doing. It also seems to not be the best experience for the customer, because if they wanted to talk to a computer, then they would have stayed with IVR [Interactive Voice Response].”A Voci spokesperson said the company trained its machine learning program on thousands of hours of audio that crowdsourced workers labeled as demonstrating positive or negative emotions. When people list jobs slated for automation, call center workers come just after truck drivers. Other workers spoke of chronic anxiety and insomnia, the result of days spent having emotionally raw conversations while, in the words of one worker, “your computer is standing over your shoulder and arbitrarily deciding whether you get to keep your job or not.” This form of burnout has become so common the industry has a name for it: “empathy fatigue.” Cogito, in an ebook explaining the reason for its AI, likens call center workers to trauma nurses desensitized over the course of their shift, noting that the quality of representatives’ work declines after 25 calls. Angela, the worker struggling with Voci, worried that as AI is used to counteract the effects of dehumanizing work conditions, her work will become more dehumanizing still.“Nobody likes calling a call center,” she said. In a video, Crossover CEO Andy Tryba describes the program as a “FitBit for work.” The modern worker is constantly interacting with cloud apps, he says, and that produces huge quantities of information about how they’re spending their time — information that’s mostly thrown away. Tryba said the company is a platform that provides skilled workers to businesses, as well as the tools to manage them; it’s up to the businesses to decide whether and how those tools are used. He said people shouldn’t have to work additional hours without pay, and that if WorkSmart marks a timecard as idle, workers can appeal to their manager to override it. Asked why such intense monitoring was necessary, he said remote work was the future and will give workers greater flexibility, but that employers will need a way to hold workers accountable. (A worker described her experience handling assistant requests as being like a call center but with heavier surveillance and tracking of idle time.) Knowledge work currently languishes in a preindustrial state, Lessin wrote in a letter at the time of the pivot, with employees often sitting idle in offices, their labor unmeasured and inefficient. Except this will be a “cloud factory,” an AI-organized pool of knowledge workers that businesses can tap into whenever they need it, much like renting computing power from Amazon Web Services. Couldn’t you imagine a future where you have the freedom to choose between starving or taking a job in a warehouse, the worker said, and you sign a contract agreeing to wear something like that, and it zaps you when you work too slowly, and it’s all in the name of making you more efficient? “I think that’s a direction it can head, if more people aren’t more conscious, and there isn’t more organization around what’s actually happening to us as workers, and how society is being transformed by this technology,” he said.

As said here by Josh Dzieza