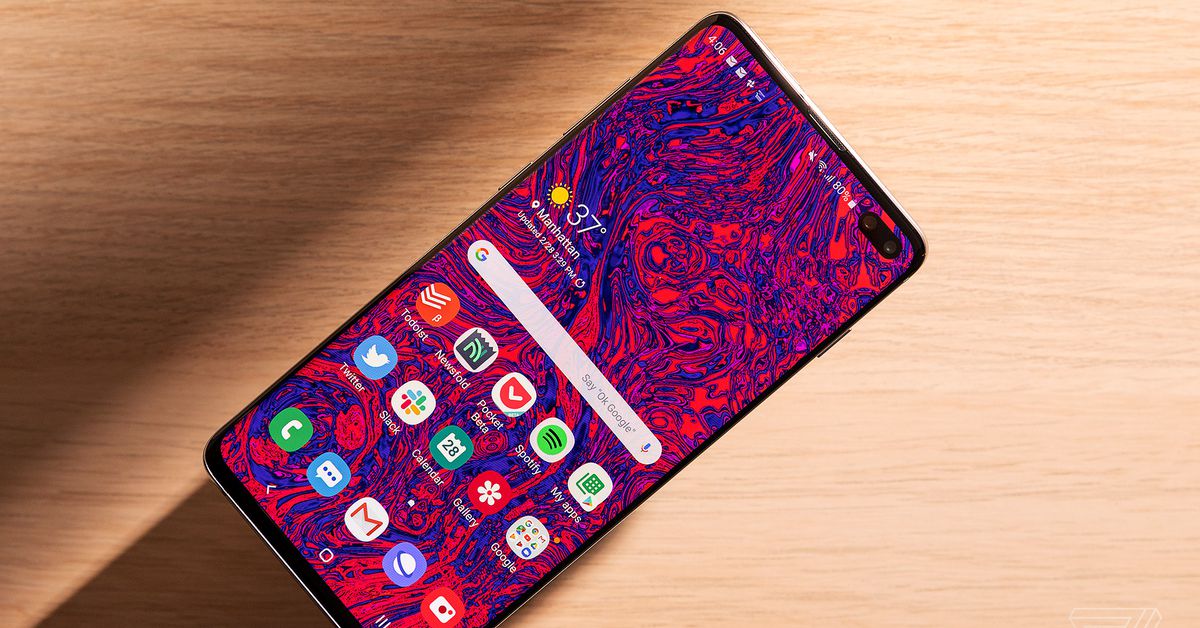 Samsung is now on Apple’s level when it comes to fit, finish, and feel, and well ahead of Google, OnePlus, and other Android device makers.On the top-tier S10 and S10 Plus, the front and rear glass curve into the metal frame, which makes the phones easier to hold, even though they have very large screens. The curved screen has been a Samsung trademark for a few years, and while some might not like it, I don’t have any issues with it.Curved screen or not, the S10 Plus is a big phone, and not one I can comfortably use one-handed. Both the iPhone or Pixel provide less storage in their base configurations and don’t give you the ability to expand it with a microSD card.You can even use the S10 to wirelessly charge another device, like Samsung’s new Galaxy Buds headphones or Galaxy Watch Active smartwatch, but I haven’t really found much use for this feature beyond showing it off.The main annoyance with the S10’s hardware is the same as the last few Samsung phones: there’s a dedicated side button for the Bixby virtual assistant. Samsung is finally making it possible to program this button to launch other apps and shortcuts — but it’s blocking the ability to set the Google Assistant or other virtual assistants to this button, so you’ll still have to resort to a third-party app if you want to do that.Aside from the hardware design, the main head turner with any Samsung phone is the display, and the S10 Plus’ does not disappoint in the least. None of these really look like HDR on a TV.) Netflix doesn’t yet offer HDR on the S10 line, but it will likely be updated to support it shortly after the phone is available to buy.I don’t think it’s any stretch to say that the S10’s screen is one of, if not the very best, screens on any phone available right now.Perhaps more interesting than the screen itself is what’s embedded in it. That’s partly because it doesn’t need to, since it’s already overexposing more than the iPhone would, but the HDR does look more natural than Apple’s as a result.One weird quirk: the S10’s portrait mode uses the main camera instead of the telephoto, so portrait shots come out pretty wide. It’s like how the iPhone XR works, as opposed to the XS.Unsurprisingly, Samsung has added new software tricks to the camera: the AI-powered scene detection mode now has 30 different scenarios it will recognize, and it has a feature that will help you compose your shots better, which is cool because it can help avoid crooked horizons in your photos. There are a couple of new effects that you’ll probably use once and then never touch again, just like Apple’s Portrait Lighting stuff.For many years, Samsung phones had beautiful, capable hardware that was let down by lousy software.

As said here by Dan Seifert