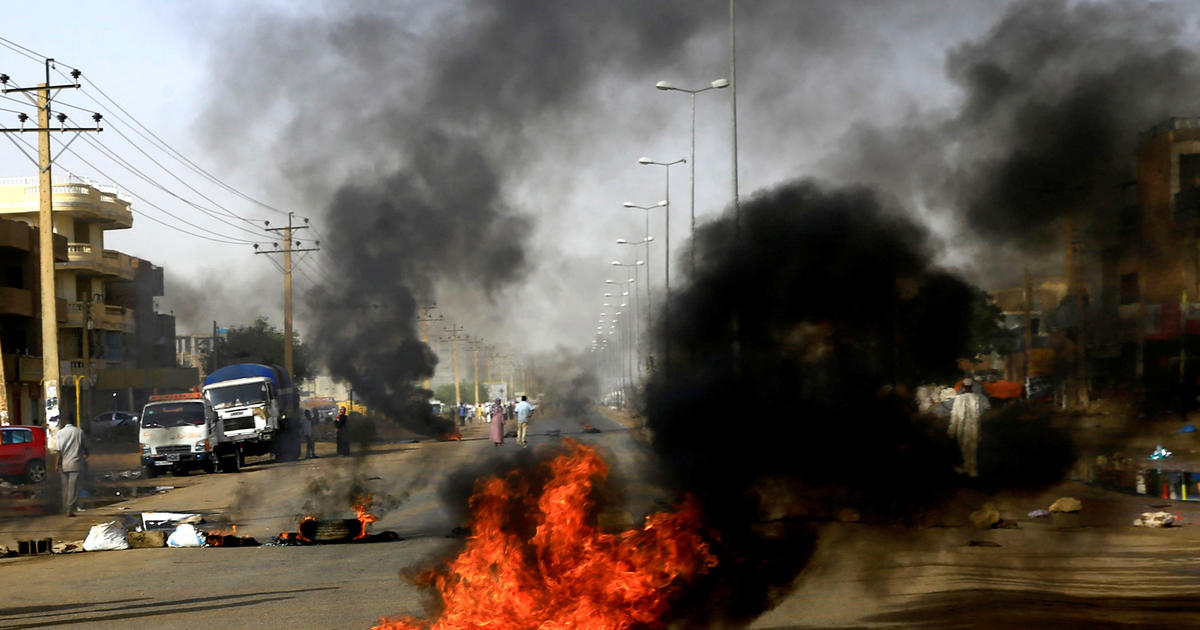 Khartoum, Sudan -- Sudanese security forces attacked a protest camp in the capital Monday, opening fire and torching tents as they largely cleared away the weeks-old sit-in aimed at pressuring the military to yield power, protest leaders and witnesses said.Protest leaders said at least 13 people have been killed and announced they are suspending talks with the military regarding the creation of a transitional government. The Forces for Declaration of Freedom and Change, which represents the protesters in transition negotiations, said Monday that protesters are unable to evacuate "the bodies of our martyrs." It said hundreds of people have also been wounded. The leaders have called for an open general strike and civil disobedience, and for the international community "not to recognize the coup." The leading opposition Umma Party called for people to set up other sit-ins, both in the capital and across the country, saying the military's raid showed it is standing in the way of "the Sudanese revolution."In videos posted online amid the early morning assault, civilians were seen running through streets lined with sit-in tents, heads down, as the sound of gunfire filled the air. Smoke rose from the area."Wounded people are lying on the ground the reception area as there are not enough beds," said Azza al-Kamel, a doctor at the Royal Care hospital near the sprawling sit-in area outside the military headquarters in the capital, Khartoum.By mid-day, security forces controlled almost the entire camp, pushing out protesters and sealing off the nearly one square mile area, two protesters said. They said only a few small pockets of protesters in the area remained.The camp has been the epicenter of a protest movement that first succeeded in forcing the overthrow of Sudan's longtime strongman Omar al-Bashir in April.CBS News' Iliana Hagenah notes that women were at the forefront of the protests against Bashir, organizing marches and standing on each others' shoulders to lead chants calling for his ouster.After the military removed al-Bashir and seized power, tens of thousands of protesters remained in the camp and other protest sites, saying an end to his 30-year rule was not enough and demanding a speedy transition to civilian rule.Protest leaders and military officials have been negotiating over the makeup of a transitional government, as protesters called for "limited military representation" in a sovereign council that would lead the country as it transitions to civilian rule over three years.Both sides have been split over the makeup and leadership of the council, with the ruling generals refusing to relinquish power.Shams al-Deen al-Kabashi, a spokesman for the ruling military council, said in televised remarks that the military was targeting an area near the sit-in site, considered problematic by the authorities because of alleged criminal activity.He said people from that area moved to the main protest site, leading to clashes. The embassies of the United States and Britain expressed concern about reported attacks on civilians.The U.S. Embassy in Sudan called on Sudanese security forces to stop what it said were "attacks against protesters and other civilians." The embassy said via Facebook that apparent attempts to move against the protest camp in the capital are "wrong" and that it holds the country's Transitional Military Council responsible for the attacks.Ifran Siddiq, the British ambassador in Sudan, said he is "extremely concerned" by the heavy gunfire he had heard from his official residence in Khartoum and the reports that Sudanese security forces were attacking the protest sit-in site. Monday's move by the military began in the early morning.Dura Gambo, an activist, said large numbers of troops had besieged the sit-in area and arrested protesters trying to leave. "They have used the heavy rain yesterday and moved in the early morning to disperse people," she said.Amal al-Zein, another activist, said security forces set fire to the tents in sit-in area. "They are surrounding the sit-in from all directions," she said.The Sudan Doctors' Committee said medical personnel and injured people were trapped in clinics in the area and demanded that they be allowed to leave.An Associated Press journalist heard gunshots and explosions, and saw buses and soldiers on foot blocking roads leading to the protest site. Civilians were not allowed to walk in the streets, including women and children.Videos circulating online appeared to show protesters standing at low brick barricades in the street, then being driven back by walls of blue-clad security forces carrying sticks.Other videos showed protesters running through streets as gunshots were heard.The Sudanese Professionals Association, which has been spearheading the protests, accused the military of a "treacherous attempt to break up our sit-in." The association called on supporters to engage in "total civil disobedience."The Forces for Declaration of Freedom and Change, which represents the protesters in transition negotiations with the ruling generals, called for toppling the military council and urged people to take to the streets in protest.

As said here by CBS/AP