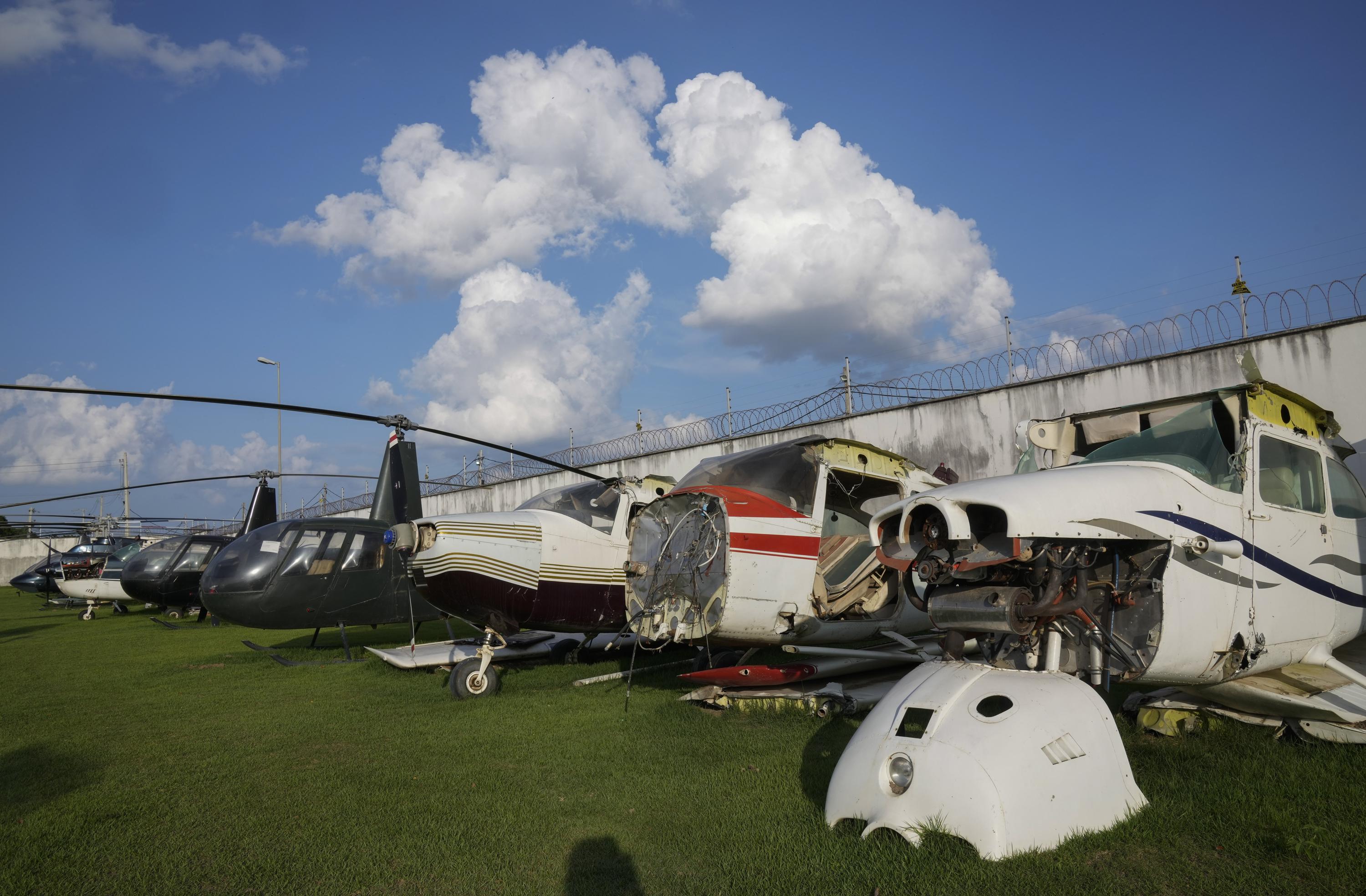 Generally, the illegal aircraft owners are local elites who launder their money in Boa Vista hotels, restaurants, gyms, and gasoline stations, according to police officials, who declined to disclose names.Drawn by high gold prices, reduced state and federal oversight, and outdated mining legislation, plus pro-mining rhetoric and proposed legislation from far-right President Jair Bolsonaro that would make it legal to mine on reserves, thousands of miners have flocked to the Yanomami reserve in search of the precious metal, exacerbating a longstanding problem that has only grown worse in recent years.An Associated Press investigation, which includes interviews with prosecutors, federal law enforcement agents, miners, and industry insiders, shows that the unauthorized aircraft — and the countless liters of fuel needed to power them and other mining equipment — form the backbone of the shadowy economy of illicit mining here in Roraima state. Even airstrips that are supposed to be used by the government to send doctors and medical supplies for the Indigenous people are used by illegal miners, according to Marugal.Last year, a young Yanomami tribesman was killed when struck by a plane piloted by illegal miners.“It is supposed to be a landing strip for us, but they’ve taken it over,” Junior Hekurari Yanomami, president of the Yanomami and Ye’kwana Indigenous Health Council, said angrily in an interview in his office.Superintendent Peres, of the federal police, said despite the beefed-up efforts to go after illegal gold mining and clandestine airstrips in Roraima state, cracking down remains a challenge.“It’s very easy to make a landing strip,” he said.‘CAPITAL INVESTMENT’Brazil’s Amazon gold prospecting is a far cry from the folkloric image of a man with a pan and a dream wading into the river. After they retrieve them, they still work.”FUELING DESTRUCTIONThe spread of clandestine communications networks on Yanomami land is one of the many new challenges authorities are scrambling to adapt to in Roraima’s modern-day gold rush.Authorities have long considered seizing or destroying costly planes, helicopters, excavators, and dredging barges an effective means of kneecapping the investors financing the illegal mining.“Investigations into individuals are slow and take time, proof is difficult to acquire,” said Marugal, the federal prosecutor in Roraima state.But they told the AP they are targeting a new flank in their fight: fuel. Huge amounts of diesel are needed to keep mining machines running and highway police regularly seize large quantities they believe are being supplied to illegal mining operators.The former prospector, who agreed to speak on the condition of anonymity, said that illegal mining fuel providers constantly switch up which gas stations they use to avoid detection.Superintendent Peres confirmed the federal police are also investigating the source of fuel used in aircraft engaged in illegal mining operations.“It is a concern of ours to identify where this fuel is coming from,” Peres said, declining to provide details on the probe. He is also a partner in the government-contracted air transport company investigated for possibly flying equipment and miners to illegal gold mining sites.Since 2018, the health ministry has awarded contracts worth a total 26 million reais ($4.6 million) to the air taxi company, according to an AP review on the government’s transparency database.De Mello’s lawyer, Ana Paula Cruz, said in a statement to the AP that neither he nor his companies have any involvement in illegal mining on Yanomami territory nor the logistics to support it, and that aircraft were seized while parked on his company’s property in Boa Vista, not on Yanomami lands. The monument stands adjacent to the state’s legislative assembly.There, on a recent Thursday morning, members of the Association of Independent Prospectors of Roraima gathered for a public hearing to protest recent operations by environmental agency Ibama and federal police that destroyed mining equipment, during which a miner was shot and killed.Dozens of them, donning yellow T-shirts emblazoned with a print of the Boa Vista miner’s monument and the words “The Prospector is a Worker,” sang Brazil’s national anthem.“We are the founders of the state,” said Isa Carine Farias, the association’s president, and who told the AP she previously worked with illegal mining. “It will end in one of two ways: either the community approves legal production, and that would be considering all environmental norms, or else we will have to keep soldiers all over that whole jungle area.”But while soldiers can provide an additional show of force to aid law enforcement operations, they do little to help the investigations by understaffed environmental agencies, police, and prosecutors working to disrupt a sprawling illicit network bent on outfoxing them.“If a big figure is arrested, another simply steps in… There is no big boss; there are too many,” said Marugal, the federal prosecutor in Roraima state.He added that the time between enforcement operations by federal police and environmental agencies is often too long, allowing the miners to reorganize quickly and resume their mining of Yanomami lands.“In certain regions (of the territory), even after operations this year, with equipment seized and destroyed, wildcat mining grew,” he said.

As said here by SAM COWIE and DAVID BILLER