The Perfect Offseason Trade Target for Every NBA Team 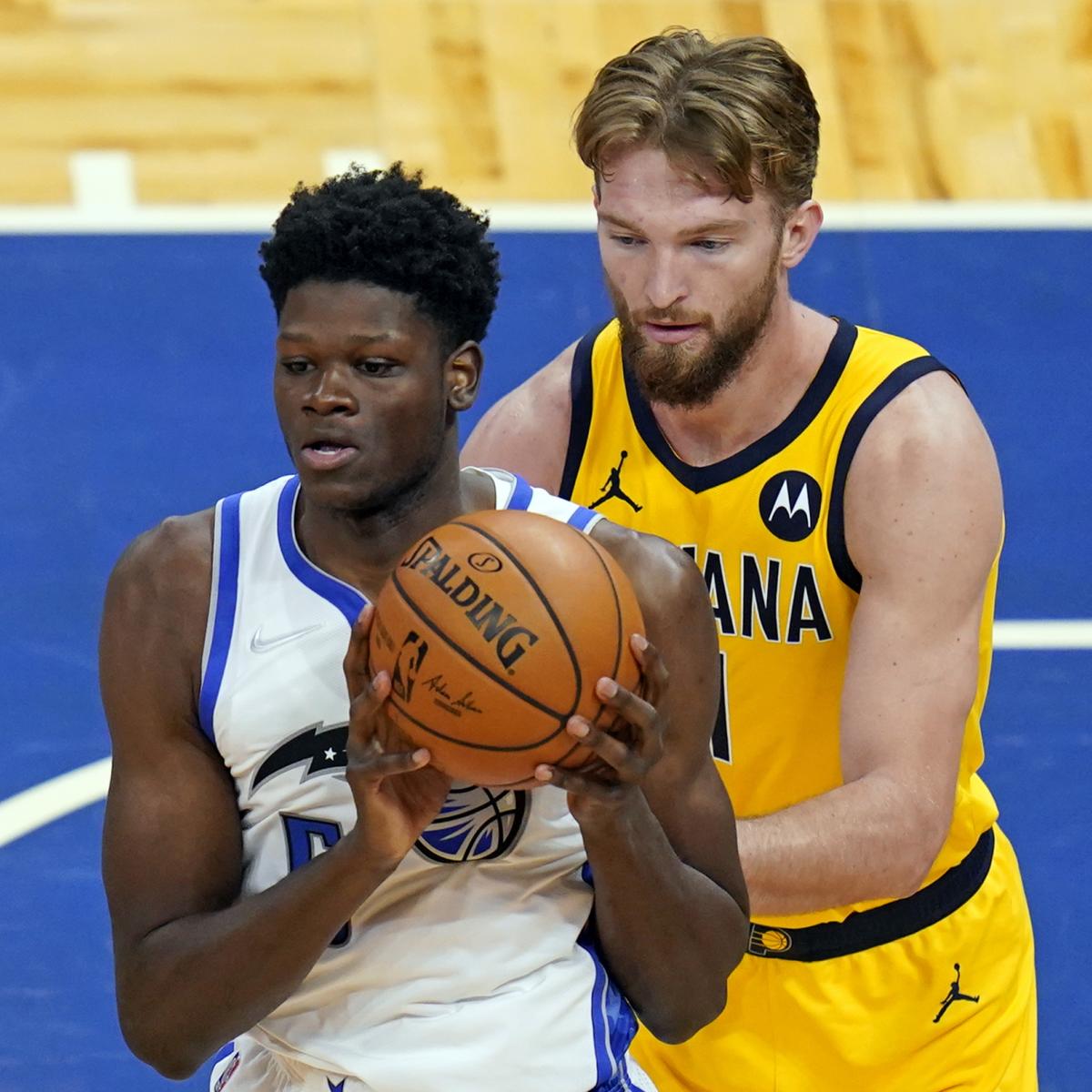 This means less strain on Young to defend, letting him focus his efforts on carrying the offense.Smart&apos;s also become a better scorer and ball-handler with time, averaging career highs with 13.1 points and 5.7 assists this season.With Tristan Thompson slightly past his prime and Robert Williams III still years away from entering his, the Celtics could use a win-now center at the top of his game.Valanciunas, 29, put up career bests in points (17.1), rebounds (12.5) and field goal percentage (59.2 percent), all while playing tough defense and shooting a respectable 36.8 percent from three.He&apos;s a proven playoff performer, starting 41 of his 48 total games over six seasons, another important factor for a Boston team that should still have its sights set on a title in the coming years.Valanciunas keeps the floor spread for Jayson Tatum and Jaylen Brown while doing all the dirty work necessary for others to shine.Brooklyn should continue to eye big men who can defend, although trying to match salary and assets to obtain a superstar is out of the question.Boucher is probably the best the Nets could realistically get, a 28-year-old breakout center for the Toronto Raptors who&apos;s under contract for just $7 million next season.He finished third in the NBA in block percentage (7.6 percent), even higher than Defensive Player of the Year Rudy Gobert (7.0 percent). The 29-year-old also registered the lowest turnover percentage of his career (6.5 percent).A backcourt of Luka Doncic and McCollum would be one of the NBA&apos;s best, with both able to play on or off the ball and put pressure on opposing defenses.With current starting shooting guard Tim Hardaway Jr. set to become a free agent, the Mavericks could very well be in the market for help on the wing.If Dallas can swap Kristaps Porzingis and filler for McCollum, the offseason will already be a success.With MVP Nikola Jokic, a pair of dynamic scorers in Jamal Murray and Michael Porter Jr., and now Aaron Gordon doing a little bit of everything, the Nuggets should only need one more impact player to win the 2022 title.Brogdon would be the perfect addition, a big guard at 6&apos;5" who can both score and facilitate based on what the team needs on any given night.Playing alongside a passer like Jokic would only open up more catch-and-shoot three-point opportunities, a shot that Brogdon hit 44.4 percent of the time this season.A starting lineup of Brogdon, Murray, Porter, Gordon and Jokic may be the best in basketball.Detroit shouldn&apos;t be going all-in on a playoff run just yet, instead developing players like Isiaiah Stewart, Saddiq Bey and Killian Hayes while only looking to add to the young talent base.Managing a sore Achilles has set Reddish back this season, but the No. 10 overall pick in the 2019 draft is still only 21 years old. The rookie&apos;s minus-16.9 swing rating ranked in the 1 percent of all NBA players this season, per Cleaning the Glass.Myles Turner, Jonas Valanciunas and Wood would all be ideal targets, with the latter the only one playing on a rebuilding team.The 25-year-old center averaged 21.0 points, 9.6 rebounds, 1.2 blocks and knocked down 37.4 percent of his threes last season, giving the Warriors another big-time offensive threat to join Stephen Curry and a returning Klay Thompson.Wood is on a great contract (two years, $28 million), meaning the Warriors could simply swap Wiseman and hang on to the rest of their core when matching salaries.Well, this only makes sense.If the Golden State Warriors ideal target is Christian Wood, the Rockets should love to take back Wiseman in return.The No. 2 overall pick in the 2020 draft didn&apos;t contribute much to winning last season, but still averaged 11.5 points, 5.8 rebounds, 0.9 blocks and shot 51.9 percent overall in his 21.4 minutes.A true 7-footer with a 7&apos;6" wingspan, Wiseman has all the physical tools to become an elite two-way player, including a capable three-point shot.While Wood helps the Rockets win now, that shouldn&apos;t really be the goal in Houston, especially with 21-year-old Kevin Porter Jr. as the team&apos;s other main building block.Houston can afford to be patient with Wiseman, whose ceiling is higher than that of Wood&apos;s.Assuming the Pacers don&apos;t tear things down following a rare trip to the lottery, adding another scorer and playmaker on the wing would help make sure Indiana is back in the playoffs next season.The Pacers already admitted pursuing Hayward last offseason when he eventually agreed to a sign-and-trade with the Charlotte Hornets, as the Indianapolis native would have gotten to come home.As questionable as his four-year, $120 million deal looked at the time, it really wasn&apos;t a talking point after Hayward put up 19.6 points, 5.9 rebounds, 4.1 assists, 1.2 steals and shot 41.5 percent from three.Even if it cost the Pacers Myles Turner in return, a lineup of Malcolm Brogdon, Caris LeVert, Hayward, T.J. Warren and Domantas Sabonis would be a force in the East.While the Clippers don&apos;t have the cap space to go out and sign DeRozan in free agency, a sign-and-trade with the San Antonio Spurs could always be arranged.A USC Trojan who grew up in Compton, DeRozan would probably love a return home, especially if it means getting back to the playoffs.The Clippers could use the four-time All-Star in a number of ways.After putting up a career-high 6.9 assists per game this season, DeRozan could play the role of a 6&apos;6" point guard or be a small-ball power forward like he did most of this season for the Spurs.

As said here by Greg Swartz