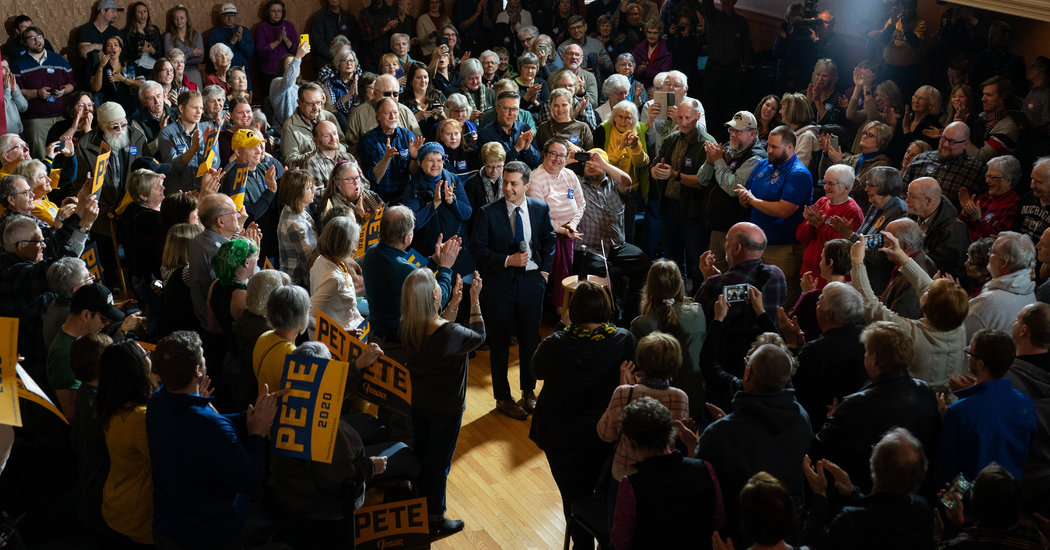 He recites the New Hampshire creed of “live free or die” with a hokey addendum: “It doesn’t have to come down to that.” He recently gave a thumbs-up to a baby.And when the time comes for prewritten audience questions, pulled from a fishbowl and read aloud, Mr. Buttigieg, the 38-year-old former mayor of South Bend, Ind., surveys the room for their authors and vamps — a mélange of scanning and squinting built into an otherwise tightly choreographed program:“The lights are rather bright. O.K. Alright.As Mr. Buttigieg has outraised and outlasted many far more established Democrats this election season, opponents have often strained to make sense of a campaign that can bear some resemblance to the under-loved cactus of South Bend: dry, unusual, exceedingly difficult to kill.And with Mr. Buttigieg now seeking to translate his remarkable rise into electoral success — appealing beyond a support base that can look disproportionately old and white — his fate could hinge on his ability to viscerally connect with audiences in the early-voting states that most reward such skills, which do not necessarily come naturally to him.Be prepared for Iowa caucus night. Barack Obama could move the masses with a pregnant pause … weighing all that is possible … in the United States of America.What, then, of Mr. Buttigieg — the viral sensation whose charisma can feel like a disarming dearth of traditional charisma?“He’s not the most charming person one on one,” said Judy Downs, the executive director of the Polk County Democrats in Iowa. Those stirred by passion and a dynamic personal touch do not always appraise Mr. Buttigieg as a generational talent.Yet in his improbable journey to the upper reaches of the Democratic field in Iowa and New Hampshire, Mr. Buttigieg appears to have carved out his own category: He is the candidate of the ear, elevated by a baritone delivery belying his age, saying the things that sound about right in a moment when the least Trumpian notes sound especially good to Democrats.“This is a time to take one last look at the Trump Show,” he told voters inside an Ottumwa gymnasium on Tuesday, “and change the channel to something better.”Supporters sometimes cite Mr. Buttigieg’s biography before his personality: his sparkling academic credentials, his military service, his history-making potential as an openly gay candidate.At least as often, though, they describe a feeling of being soothed, of imagining — as Mr. Buttigieg often instructs at the beginning of his stump speech — the day after President Trump has left office. But some allies also suggest that Mr. Buttigieg’s sexual orientation — and relatively recent public identification as gay — present implicit complications for a candidate who seems to recognize his reputation as less than emotive.“I would argue that some people are given more room to be emotive than others,” he said in an interview with the New York Times editorial board. Like, ‘This person is not very comfortable right now.’”Ms. Downs suggested that Mr. Buttigieg’s inability to “whip support up in a frenzy” was perhaps a counterintuitive advantage, supplying a sharp contrast to Mr. Trump.David Axelrod, Mr. Obama’s former chief strategist, said that while Mr. Buttigieg had grown as a candidate, he still registered as “a little reserved,” which Mr. Axelrod called a liability.“That’s a big test for him,” said Mr. Axelrod, who is friendly with Mr. Buttigieg but not involved in the campaign.

As said here by Matt Flegenheimer