The Vegetarians Who Turned Into Butchers 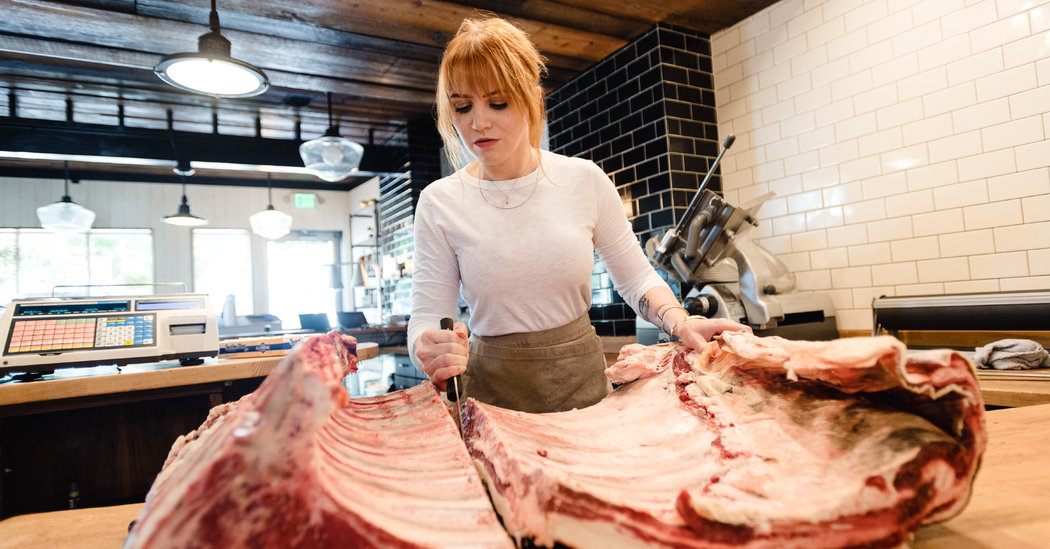 But these newer butchers contend that the industry is proceeding too slowly, with a lack of transparency that doesn’t inspire trust.“I’m basically in this to turn the conventional meat industry on its head,” she said, as Darth Vader melted in her hot cast-iron pan.Once the tallow was liquid, she added the steak, letting the meat sizzle as she hummed “The Imperial March.” She left it in the pan a lot longer than I was expecting; like many of her ex-vegetarian customers, Ms. Kavanaugh prefers her steaks cooked to medium.It was one of the best steaks I’d ever had, which is saying a lot: I like my meat black-and-blue. Crisp-edged, velvety and still remarkably juicy, it had a mineral tang and funky brawniness that would make its blander, cornfed cousins taste like chicken in comparison.The ethical butchery movement first gained traction about 15 years ago, in the wake of the journalist Michael Pollan’s 2002 New York Times Magazine article about the abuse of factory-farmed beef cattle, and his subsequent book, “The Omnivore’s Dilemma,” published in 2006.One of the central questions in the book is whether Mr. Pollan can bring himself to kill an animal — first some chickens, then a wild pig — for his own dinner.“It seemed to me not too much to ask of a meat eater, which I was then and still am,” he wrote, “that at least once in his life he take some direct responsibility for the killing on which his meat eating depends.”This challenge struck a chord with many people, including vegans and vegetarians looking to change the factory-farming system.For Janice Schindler, 28, who was a vegan for five years and is now the general manager of the Meat Hook butcher shop in Brooklyn, the animal in question was a turkey at a “Kill Your Own Thanksgiving Dinner” event at a local farm.“It was really morbid. (Critics of the alternative approach say that not all studies show improved carbon sequestration on grazed grassland, and that the system can’t produce enough meat to meet current demand.)“I grew up hiking the prairies of Colorado, and I developed a really deep love for those plains,” Ms. Kavanaugh said. Other former vegetarians reported that they, too, felt better after introducing grass-fed meat into their diets: Ms. Kavanaugh said eating meat again helped with her depression. Mr. Applestone said he felt far more energetic.“It can be hard to balance your diet as a vegetarian, especially when you’re younger, and I wasn’t doing it right,” he said.Grass-fed and -finished meat has been shown to be more healthful to humans than that from animals fed on soy and corn, containing higher levels of omega-3 fatty acids, conjugated linoleic acid, beta carotene and other nutrients. “You can’t be healthy unless the animals you eat are healthy,” There’s another benefit to grass-fed and -pastured meat: It can be absolutely delicious, as that steak in Denver reminded me.Mr. Applestone vividly remembers that first bacon sandwich (made with pasture-raised pork) in his post-vegetarian life, served on a soft Martin’s potato roll: “I thought it was the greatest thing that ever hit my mouth.”Jered Standing, 40, who owns Standing’s Butchery in Los Angeles, never stopped longing for meat during the five years he was a vegetarian. “I opted out in the only way that I could, by rejecting meat,” Ms. Fernald said.