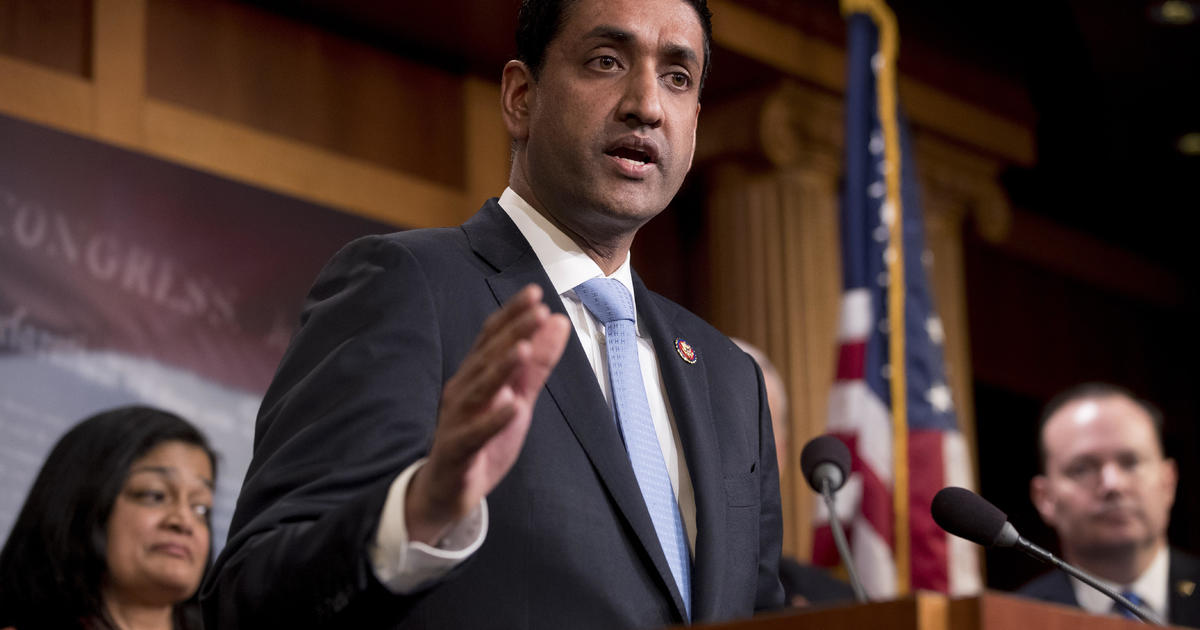 "I do believe American leadership in the world matters, that we can't just disengage from the world," Khanna told CBS News. I just don't think military intervention is going to get us there."Khanna, the grandson of an Indian political activist who spent time imprisoned with Mahatma Gandhi, cites such figures as John Quincy Adams and Jimmy Carter as influencing his foreign policy perspective."I think that when you look at our founding principles, it was based on America as a nation committed to universal human rights and a nation that was weary of foreign entanglements and foreign alliances that did not keep us safe or promote our interests," Khanna said.He paraphrased a quote from Adams on why U.S. foreign policy should be based on restraint: "America should promote and stand up for the ideals of liberty and equality around the world … But we should be very wary to use military force in promoting those ideals, because that force will often backfire, and we will often be seen as a dictator even if we intend to be a liberator."Khanna's non-interventionist philosophy does not verge into isolationism. The biggest way to make sure that a) we avoid a war, and b) that we have a check on China, is if they're dependent on our technologies," Khanna said.Khanna also said that he would want to strengthen alliances in the region to counteract China, although he does not support re-entering the Trans Pacific Partnership, a trade deal negotiated by President Obama and scrapped by Mr. Trump, which was designed in part for that purpose.Khanna's views on foreign policy, however, don't just appeal to those on the left end of the political spectrum. But although they are ideological opposites, Khanna and Gaetz agree on a key issue: The president can't start a war with Iran without Congress' stamp of approval.Khanna and Gaetz introduced an amendment to the National Defense Authorization Act (NDAA) to prevent federal funds from being used for any military force in Iran without congressional approval. First, they are wary of war and they believe the executive branch has gone to war too many times for too long without congressional authorization or involvement," Khanna said. "And second, they understand that our competition is China, and they want to make sure that we are being strategic in winning the 21st century for American values."Khanna is hoping that the final version of the NDAA negotiated in conference with the House and the Senate will include his and Gaetz's amendment.Khanna and Sanders have collaborated on some foreign policy bills in Congress, such as the act to end U.S. involvement in the conflict in Yemen. They care about us not getting us tangled in foreign wars," Khanna said about his advice to the senator on foreign policy."You should make one promise to the American people," he said he told Sanders. "Under your presidency, there will be no more unconstitutional wars.""I think he has the most credibility to do that given the track record of his success in Yemen," Khanna said, referring to the legislation to end U.S. involvement in the country. He also cited Sanders' support for his NDAA amendment, and his work to ensure that it would be included in the final form of the bill.Khanna said that Sanders' action on Yemen and Iran showed a "clear distinction between Bernie Sanders and the rest of the field and Bernie Sanders and Donald Trump."Khanna may have another opportunity to work across the aisle, as his office is currently crafting legislation to amend the Espionage Act so that it cannot be used to indict journalists.Julian Assange was charged under the Espionage Act in May for obtaining and publishing classified information. "The Trump administration charging Assange opened up a chilling effect on journalism," Khanna said, noting that President Obama had considered using the Espionage Act to charge Assange and decided not to do so."If you are the recipient of information that is sensitive and you haven't been involved in assisting the collection of information, but you're just receiving that information from a source and publishing it for journalistic purposes -- then you can't be prosecuted," Khanna continued. He added that news outlets publishing sensitive information often provides "greater transparency" into human rights violations and matters of war and peace.Khanna said his office is currently working with the American Civil Liberties Union and other experts to ensure that the language in the legislation is "precise." Once it is finalized, he said he will discuss it with independent Rep. Justin Amash and other conservative members of Congress, who may be open to a bill limits the power of the federal government.Khanna hopes to have the bill introduced by the end of the year."It will be a major protection for journalists' ability to work on these critical issues," Khanna said.

As said here by Grace Segers